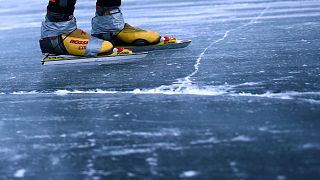 Ice-skating, fishing and driving heavy trucks on frozen lakes could soon be activities of the past due to climate change, scientists have found.

There are more than 58.5 million lakes on Earth covered by ice, either on a seasonal or year-round basis. Viewers of ‘Frozen Planet II’ have been treated to some of these spellbinding vistas in the UK recently.

But while we’re well aware that the poles are melting at an alarming rate - with the Arctic warming three times faster than the rest of the planet - less is known about the toll global heating is taking on the world’s frozen lakes.

People living by these icy bodies of water have witnessed a widespread loss of lake ice, with many experiencing delayed winter freezing or an earlier melt.

Now, using an advanced ‘lake simulator’, scientists have determined that seasonal lake ice will be 0.23 metres thinner on average by the end of the century. Lakes will also be bare for 38 days more on average.

"Our results demonstrate that the [annual] duration of safe ice over the next 80 years will shorten by two to three weeks depending on the future warming level,” says Dr Lei Huang, co-author of two new studies on the topic published in Nature and Earth’s Future journals.

“In regions where lakes are used as ice roads to transport heavy goods and supplies, the number of days with safe ice conditions will decline by more than 90 per cent, even for a moderate warming of 1.5°C above early twentieth century conditions.”

Lake communities are on thin ice

Seasonal ice is key to many lake ecosystems and the people who depend on them.

Northern Indigenous communities already suffer among the highest winter drowning rates through ice. There have been more and more search and rescue incidents associated with thinning ice cover in Alaska and Canada’s northern territories, where Indigenous people rely on traditional hunting and fishing for their livelihoods.

In the Far North, roads over frozen lakes are used as critical transport routes for getting food, fuel, medical supplies and machinery to remote communities in winter - avoiding the need for expensive air travel. But the trucks need the ice to be at least one metre thick.

Without human intervention, the researchers estimate that the duration of safe ice for winter roads is projected to decline by up to 99 per cent within a 3°C warmer world.

Perched on the shore of Lake Superior, one of North America’s Great Lakes, the city of Bayfield, Wisconsin, also faces a less stable future. Currently, an ice road is used to transport children to school on Madeline Island, replacing the summer ferry, but the ice must be at least 30cm thick to ensure a safe crossing.

"According to our computer model simulations, many densely populated regions in the mid-latitudes are projected to experience a large deterioration in safe ice conditions for recreational activities,” says Dr Iestyn Woolway from Bangor University in the UK.

“Already, a 1.5°C warming above early twentieth century conditions can lead to more than 60 per cent loss in the duration of safe lake ice. This will negatively impact local communities that rely on the ice recreation industry."

In Sweden, the ice fishing industry alone generates €890 million in revenue annually. Though the researchers note that declining winter sums could be offset with increasing income in the open-water summer season.

How are thinning lakes impacting the ecosystem and animals?

Just as people face more perilous journeys in the Far North, so animals have riskier crossings to make across frozen lakes and rivers.

Around 10,000 migratory caribou drowned in the Quebec-Labrador Peninsula in the 1980s because of thin ice.

“Lake organisms are suffering severe changes in their habitat,” according to the Nature study, meaning some cold species could become locally extinct in polar lakes.

This is happening as scientists and explorers make new discoveries about these unique ecosystems. Only a decade ago, divers found ancient, alien-like structures called giant stromatolites rising from the bottom of Lake Untersee in East Antarctica. These primitive life-forms might point to the existence of life on other frozen planets, David Attenborough told viewers of his BBC show.

It’s still hard to say exactly how individual lakes will be impacted. “We have to admit that our simulation may have larger uncertainties in [the Great Lakes] than in small lakes, because ice dynamics are more complicated in these large lakes, and we do not consider the role of lake size in the ice decline in the current study,” Dr Huang tells Euronews Green.

In both Lake Superior and Russia’s Baikal Lake, he adds that lake ice loss is expected to have large impacts on aquatic ecosystems because of altered nutrient cycling and light availability. But, “the underlying dynamics and drivers remain to be uncovered.”