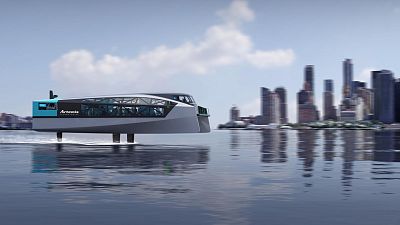 Underwater wings lift the boat out of the water to reduce its impact on the local environment.   -   Copyright  Artemis Technologies   -
By Rosie Frost  •  Updated: 28/09/2022

One of the world’s most advanced electric passenger ferries could soon link Belfast and Bangor in Northern Ireland.

With a top speed of 69 kilometres per hour, the vessels will “fly above the water” with underwater wings lifting up like a plane taking off.

They can carry up to 150 passengers with the design mitigating the effects of seasickness and reducing the strength of waves that can damage the shoreline.

Raising the hull above water cuts drag, delivering estimated fuel cost savings of up to 85 per cent compared to conventional diesel-powered ferries, the designers say.

A “unique” high-speed collision avoidance system will also help prevent the vessels from hitting marine animals. The makers say they will follow an “altered path away from sea life, wildlife, debris and other in-water objects”.

The company behind the 100 per cent electric ferry Artemis Technologies was founded by Olympic sailing champion Dr Iain Percy OBE.

It is a spin-off of the Artemis Racing team which competed in the America’s Cup - the world’s oldest international sailing competition.

Many water-based cities around the world are grappling with the challenge of growing populations, congestion, and pollution

“Many water-based cities around the world are grappling with the challenge of growing populations, congestion, and pollution,” Percy says.

“The EF-24 Passenger can provide an immediate green transport solution that competes economically with road and rail in places like San Francisco, New York, Venice, Istanbul, Dubai, and Singapore.”

The aim of the ferries is to provide a “cost-effective public transport solution” that can cut down on “air pollution, congestion and noise,” Percy adds. It is just one of a range of zero-emissions vessels being developed by the company.

When will the electric ferries start running in Northern Ireland?

These new vessels will link Belfast to Bangor in Northern Ireland, taking 25 minutes to make the crossing.

Artemis Technologies has partnered with Condor Ferries to run the pilot scheme which is due to start in 2024.

The launch of the first ferry is expected to create 125 jobs and, as more services are launched over the next 10 years, that could rise to 1,000 roles.

This isn’t the first sustainable ferry route set to launch in the UK.

A new wind-powered catamaran between Dover and Boulogne-sur-Mer is set to launch in 2023. The daily foot passenger sailboat service will take around four hours.