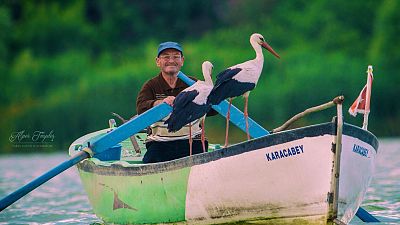 “Borders are made by people, they don’t matter for birds.” These are the words of Ilka Beermann, a passionate ornithologist who helps run a support network for one very special species.

She oversees the European Stork Villages Network (ESVN), a collection of 15 villages from 15 different European countries, all with the best interests of the white stork at heart.

The last century saw a great decline in the Europe's white stork population. “The idea behind the ESVN is for the villages to serve as a model for white stork conservation at the national level,” explains Beermann, a project manager at the EuroNatur charity, which has helped boost the birds’ numbers.

But white storks also have a natural advantage. They’re not like black storks which seek privacy and avoid human contact. Instead, these sociable birds always try to find ways to be in close proximity to humans.

They build their nests on roofs, go in people’s gardens, and eventually, become a part of their daily lives.

White storks return to their previous year’s nesting site in March or late February. They stay for six months and migrate to Africa around September where they spend the winter.

Many residents of European stork villages get excited when it’s time for the storks to fly back. For them, storks are more than just birds, they’re their friends.

The fisherman with a decade-long stork friendship

This is certainly the case for Adem Yılmaz, a fisherman from the European stork village of Eskikaraağaç in Türkiye. 11 years ago, a stork followed him to his boat and kept coming back every day.

The stork became a companion for Adem Yılmaz, who is known as Uncle Adem by the villagers and Turkish media.

Uncle Adem named the stork Yaren, which means close friend and companion in Turkish. When Yaren landed on his boat, Uncle Adem had no idea if he would see the bird again.

But, this is how his next 11 years turned out to be: fishing with Yaren for six months and waiting for his stork friend to come back for the rest of the six months of the year.

In the small Turkish village, every nest is assigned to the nearest family.

Everyone is involved with storks in Eskikaraağaç, young and old alike. In the small Turkish village, every nest is assigned to the nearest family.

The youngest of each family becomes the symbolic host of the nest. This way, children get a sense of belonging and grow up to be more responsible. It’s a common activity for children in Eskikaraağaç to race ‘their’ storks to see whose will arrive first in March.

For the European stork village of Taraš in Serbia, there is no doubt about which stork will come first. It is always Prvoje. “Prvoje means first,” explains Aleksandra Marovac Cucic, president of The Association of Citizens Taraš Storks.

“He is named this way because he has been the first stork to return to Taraš for the past ten years and he’s also always the first one to have babies. He’s Serbia’s superstar—the local media always announces his arrival.”

Just like in Eskikaraağaç, residents in Taraš are very involved in stork protection. The most recent festival organised by the Association of Citizens Taraš Storks was a farewell event to see off the storks that recently left the village.

Children sent off 31 balloons, one for each stork couple that arrived in Taraš this year.

Stork villages are the scene of romance, too

“Every country has its own Adem and Yaren,” tweets Alper Tüydeş, a Turkish photographer who is also good friends with Uncle Adem and Yaren.

And he’s right. This is true for many places in Europe, beyond the ESVN villages. In Croatia, former school janitor Stjepan Vokić rescued Malena the Stork and took care of her for many years. As Malena couldn’t fly, she permanently stayed at home in Croatia with Vokić.

By rescuing Malena, Vokić also helped her find love. If she wasn’t saved, she would have never met Klepetan. Malena’s mate, Klepetan, was a wild stork and flew thousands of miles every year to make his way back to her.

Unfortunately, Malena died a year ago but the pair’s legacy lives as Croatia’s most unusual love story.

“We have our version of Malena and Klepetan here in Hungary,” says animal rescuer András Márton. “The only difference is, Macus, the male stork, is the permanently injured one. He lives in our garden. Sophie, his ‘wife’ is the wild stork who migrates to Africa and comes back for Macus every year.”

Márton manages the Facebook page Birdmania and has rescued many animals so far. Among all the storks he rescued, one marked him in particular. Her name was Zokni which means socks in Hungarian. Zokni was a free-flying stork and every time she spotted Márton from the sky, she would land on his shoulder.

“White storks are friendly and out in the open,” says Caroline Walta, who is researching urban storks from The Hague, Netherlands. “Most birds live a secretive life but storks don’t. You can even see their babies when they are nesting. When I was a kid, they practically didn’t exist.”

I’ve met so many stork lovers from all over the world throughout the years and we keep in touch through Facebook groups. We are one big stork family.”

What are the biggest threats to storks?

According to Germany’s Nature and Biodiversity Conservation Union (NABU) the number of breeding pairs increased by 85 per cent in western Europe and 31 per cent in the east between 1994 and 2004.

But the fact that storks come back to their nests every year is no small achievement. Their journey is one with many obstacles - electric cables, windmills, skyscrapers, hunters, and extreme weather conditions.

Electrocution, in particular, remains one of the biggest problems.

Birdlife Hungary (MME) gets many emails and calls every year from people who are concerned about storks.

According to Péter Lovászi, the director of MME, 90 per cent of storks build their nests on electric poles and there is still a lot of work to do about this. Electrocution was, unfortunately, how Zokni the stork died.

The storks take their leave

Adem and Yaren, András and Zokni, Stjepan and Malena - these are just a few of the beautiful stork-human relationships within Europe’s “big stork family”.

People from all over the world form communities to save storks despite all the difficulties. In the meantime, they make friends and form unique connections both with storks and each other.

Reportedly, there is even a couple who met at a stork festival in the European stork village of Andrid, Romania and ended up getting married.

It is now time for white storks to leave. Yaren already left a couple of weeks ago. Besides Adem Yılmaz, many stork friends from all around the world will hold their breaths for six months, hoping that he will be back for the twelfth time in 2023.