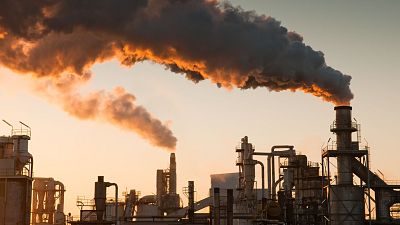 Oil and gas companies may commit to net zero goals in public - but internal emails tell a different story.

A US congressional investigation into climate disinformation has revealed over 200 pages of in-house messages between lobbyists and Shell, Chevron, and ExxonMobil employees.

In these internal memos, personnel question their own environmental commitments and joke about climate collapse.

Politicians and campaigners have slammed the companies for their “deception.”

“These revelations are the latest evidence that oil giants keep lying about their commitments to solve the climate crisis and should never be trusted by policymakers,” said Richard Wiles, president of the Center for Climate Integrity.

“If there is one thing consistent about the oil and gas majors’ position on climate, it’s their utter inability to tell the truth.”

So what do the emails reveal? Here are four questions that the documents answer.

Are oil companies committed to the Paris Agreement and net zero?

Exxon is publicly committed to the Paris Agreement to keep global heating under 1.5 degrees Celsius.

But in August 2019, Exxon’s chief Executive Darren Woods sent out a memo urging an industry lobby group to remove a reference to the climate treaty from a draft sustainability announcement.

Such a reference “could create a potential commitment to advocate on the Paris agreement goals”, the executive warned.

Please do not give the impression that Shell is willing to reduce carbon dioxide emissions to levels that do not make business sense.

The oil major has pledged to become net zero by 2050. But internal 2020 PR guidance calls on employees to frame a net zero goal as “a collective ambition for the world” rather than a “Shell goal or target”.

“Please do not give the impression that Shell is willing to reduce carbon dioxide emissions to levels that do not make business sense,” reads a Shell PR guidance slide.

“Shell has no immediate plans to move to a net-zero emissions portfolio over our investment horizon of 10-20 years.”

Do oil companies believe in their own sustainable technology?

Exxon has promoted algae-based biofuels as a key tool in the energy transition.

The multinational company has spent $70 million (€70 million) on research and advertising for the fuel, which would be generated from genetically modified algae species.

One 2021 advert claims “we want something that will grow really fast, so that we can make a lot of fuel.”

However, a leaked 2018 presentation conceded the technology is “[s]till decades away from the scale we need.”

After discussing using the word ‘abundant’ in algae advertising, a public affairs manager warned that it could create “angst” with researchers.

Other fossil fuel companies have invested heavily in carbon capture and storage, a technology that pulls emissions from the air and injects them deep into the earth.

A Shell executive told colleagues “we want to be careful to not talk about CCUS [carbon capture, utilisation and storage] as prolonging the life of oil, gas or fossil fuels writ large.”

But for BP, the main goal of this technology is to “enable the full use of fossil fuels across the energy transition and beyond,” the captured emails reveal.

What do oil companies think of climate activists?

In 2019, Shell invited prominent climate scientist Peter Kalmus to speak at a conference.

But after they viewed his presentation, the invite was rescinded.

After negative coverage, Shell’s climate change adviser David Hone said those who invited a climate scientist “didn’t do their due diligence.”

Why are oil companies getting rid of some of their most polluting plants?

Shell has sold off many of its worst emitting facilities.

“No one in the company has said this, but the pattern is pretty clear,” Shell employee Steve Lesher wrote in a 2021 email.

“If you’re a major greenhouse gas emitter, and particularly if you operate in a GHG-sensitive area like (California, Washington) or (Canada), your days in the Shell family are probably numbered.”

However, the emails suggest that this sell-off approach isn’t applied worldwide.

“Where we DO own high GHG (Greenhouse gas) intensive things, it’s in areas where they aren’t that politically sensitive about such matters: China, Singapore, Malaysia, Louisiana,” Lesher wrote.

Speaking to the Guardian, an Exxon spokesperson slammed the “selective” publication of emails and reiterated the company’s commitment to the 2015 Paris climate deal.

A Shell spokesman said it was making “extensive efforts” to take part in the energy transition and was committed to becoming a “net zero energy business.”