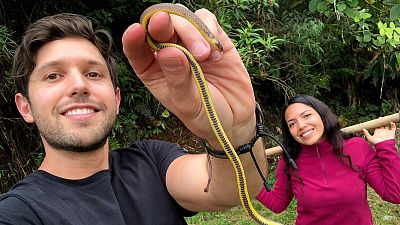 Scientists have unearthed three new species of snake living under graveyards and churches in Ecuador.

The shy serpents belong to the ‘cryptozoic’ branch, meaning they live underground, and were spotted in remote towns in the Andes.

All three are part of the ‘Atractus’ group, the most species-rich genus in the world, with 150 known species. Most of them inhabit remote cloud forests and rarely cross our paths, but the receding forest line has forced the small reptiles into human spaces, both dead and alive.

This is bad news for the ‘archaic-looking’ snakes, as they are generally feared by locals who kill them on sight. But attitudes are changing, and the researchers behind the study, published in the ZooKeys journal this month, hope their identification will give the snakes a fighting chance.

"The discovery of these new snakes is only the first step towards a much larger conservation project," says lead author Alejandro Arteaga. With the help of the Zoological Society of the Conservation of Species and Populations (ZGAP), the scientists plan to establish a nature reserve to protect the ground snakes.

“This action would not have been possible without first unveiling the existence of these unique and cryptic reptiles, even if it meant momentarily disturbing the peace of the dead in the graveyard where they lived,” Arteaga adds.

How were the snakes discovered in graveyards?

The scientists weren’t looking for snakes at all when they got a tip off from a local woman. Arteaga and his team were on an expedition to rescue extinct species of toads when they stopped off at a house near the town of Amaluza, in southern Ecuador, to eat.

“The lady that was preparing the food overheard our conversation about frogs and snakes and told us she often saw snakes when she went to visit her deceased family members in the town's graveyard,” Arteaga tells Euronews Green.

“We were curious about this and went looking for ourselves. We started digging a few metres from the graves since the ground looked like prime ground snake habitat: soft and humid soil with lots of earthworms and insect larvae.”

When local teacher Diego Piñán moved to El Chaco in 2013, the town where one of the new reptiles was found, it was not a safe space for snakes. “I used to see many dead snakes on the road,” he says, “others were hit by machetes or with stones.

“Now, after years of talking about the importance of snakes, both kids and their parents, while still wary of snakes, now appreciate and protect them.”

Luckily Piñán preserved the dead snakes he found in alcohol-filled jars, which enabled the scientists to extract DNA from their bodies. They also used the specimens to count scales and measure body proportions - “essential steps in establishing the differences between the new species and those already known,” explains Arteaga.

Endangered snakes: Why naming is knowing and caring

All three snakes have been named in honour of organisations and people working to conserve cloud forests in the tropics - crucial habitats for thousands of species.

‘Atractus discovery’ was found hidden underground in a small graveyard in a remote cloud forest town in southeastern Ecuador. One snake was spotted crossing a series of cement stairs on a November evening in 2018, and another two were found around 30cm below soil on the edge of the graveyard.

‘Atractus michaelsabini’ - found beside an old church - takes its name from the nature-loving grandson of American conservationist and philanthropist Andrew Sabin. While ‘Atractus zgap’ is so called in thanks to ZGAP’s support of fieldwork for endangered Andean reptiles in Ecuador.

"Naming species is at the core of biology," says Dr. Juan M. Guayasamin, co-author of the study and a professor at Universidad San Francisco de Quito. "Not a single study is really complete if it is not attached to the name of the species, and most species that share the planet with us are not described."

Identifying the snakes is also the first step to protecting them. The latter two reptiles are considered to be facing a high risk of extinction in the near future, their land fragmented by deforestation and cattle-farming.