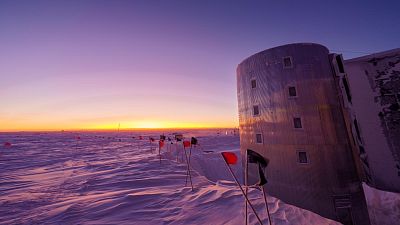 The Sun dawns over the NOAA facilities in the South Pole where a hole in the ozone layer opens up every year.   -   Copyright  Jeff Keller/NOAA Research/Cover- via Reuters Connect
By Rosie Frost  •  Updated: 19/09/2022

Earth’s ozone layer protects all life on Earth from the sun’s harmful radiation.

But in the late 20th century, human emissions of certain damaging chemicals began to affect the number of ozone molecules in the atmosphere. This has resulted in a dramatic hole opening up over Antarctica every year caused by complex meteorological and chemical processes.

In 1987, just seven years after scientists discovered man-made chemicals were damaging the ozone layer, the Montreal Protocol was signed to try and curb the amount of harmful chemicals in the atmosphere.

Previously found in refrigerators, air conditioners, hair spray and industrial cleaning products these chemicals started to be phased out to protect the ozone layer. Agreed by all 197 parties, this was one of the first ever universally ratified treaties in United Nations history.

Now, new research from the National Oceanic and Atmospheric Administration (NOAA) in the US has found that concentrations of harmful chemicals that damage the ozone layer have dropped.

How has the ozone layer’s recovery hit a ‘significant milestone’?

In early 2022, NOAA scientists found that concentrations of harmful chemicals had declined by just over 50 per cent in the mid-level of the stratosphere compared to the 1980s.

Scientists at the NOAA say it is a “significant milestone” on the path to recovery.

Recovery of the ozone layer isn’t a “forgone conclusion”, however, as atmospheric levels of these damaging chemicals need to continue declining.

Concentrations of these chemicals over Antarctica, where a hole appears every year, are also dropping but at a slower rate.

This hole was larger than usual - bigger than the size of the continent itself - in 2021. The NOAA predicts that the Antarctic ozone layer could eventually recover “sometime around 2070”.

Until it eventually closes, the hole is being tracked by the Copernicus Atmosphere Monitoring Service (CAMS). It usually begins forming during spring in the Southern Hemisphere - from August to October. It reaches its maximum size between mid-September and October then ozone levels return to normal by the end of December.

This year, CAMS scientists have been closely monitoring the hole’s development since the end of August using three-dimensional modelling.

“The 2022 Antarctic ozone hole started to develop in late August and has so far followed similar trends from the last decade in terms of area, minimum total column, mass deficit and minimum temperature,” says Vincent-Henri Peuch, Director of the Copernicus Atmosphere Monitoring Service.

“According to our data from the start of September, the size of the ozone hole is within the average range. However, we will be watching very closely in the next few weeks as the 2020 and 2021 ozone holes only started to become exceptional later on.”

How a summer of droughts, floods and fires is hiking up food prices