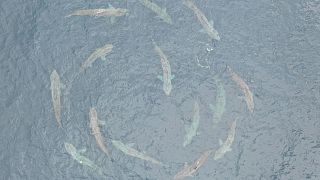 A circle of sharks might sound like the last place you’d want to find yourself in the middle of. But there’s a romantic reason behind this rarely-seen formation, scientists have found.

Basking sharks spotted circling off the west coast of Ireland were engaged in ‘shark speed dating’, according to marine biologists from the Marine Biological Association (MBA) and the Irish Basking Shark Group.

The species wouldn’t be interested in you anyway: basking sharks are slow-moving ocean giants which can grow up to 12 metres in length and feed on microscopic animals called zooplankton.

As is true of shark species the world over, humans have done far more damage to their kind than they have ever done in return. Throughout much of the twentieth century in the north-east Atlantic, basking sharks were hunted for their liver oil and fins, dramatically reducing their population.

It’s hoped the new insight into the gentle giant’s ‘love dance’ will encourage further conservation measures in European waters, where they remain endangered.

Why do basking sharks circle to find love?

Circling formations of sharks have been documented on a handful of occasions over the past 40 years in the north-west Atlantic off Canada and the USA.

Although basking sharks are often seen filter-feeding plankton in UK and Irish coastal waters in the summer, the circling formations were rarely seen and scientists could not explain the behaviour.

Over five years from 2016 to 2021, marine biologists captured footage of 19 circling groups on underwater cameras and aerial drones off County Clare in Ireland. They found each group comprised between 6 and 23 sharks swimming slowly at the surface, with others deeper down, in a three dimensional ring structure known as a ‘torus’.

A courtship torus not only forms but acts like a slow motion ‘speed-dating’ event for assessing lots of potential mates in one go.

“How usually-solitary basking sharks find a mate in the ocean’s expanse has been an enduring mystery,” says Professor David Sims, Senior Research Fellow at the MBA and lead author of the new study published in the Journal of Fish Biology. “Incredibly we now find that a courtship torus not only forms but acts like a slow motion ‘speed-dating’ event for assessing lots of potential mates in one go.”

In a giveaway to what was going on, the scientists recorded equal numbers of sexually mature males and females which were not filter-feeding. Some females had a paler body colour than males, a difference seen during courtship and mating behaviour in other shark species.

Despite the torus staying intact for several hours or even days, individual females and males got acquainted with most other members of the group within a few minutes. Gentle fin to fin and fin-body touching was observed, with suitors rolling over to expose themselves: an unusual move for the usually reserved basking shark.

“It is astonishing that this wonder of the natural world has remained hidden for so long, presumably because circles most often form at depth away from surface observation, which could explain why mating itself has never been seen,” adds Professor Sims.

Are basking sharks protected in Europe?

Basking sharks are listed as endangered on the IUCN red list of threatened species. As they know no borders, the Convention on Migratory species (CMS) also seeks to protect them globally.

But despite national protection in many parts of the world, legislation to defend basking sharks in Irish waters was only drafted earlier this year, as an amendment to the Wildlife Act.

If signed into law, it will become illegal to hunt, injure, interfere with or destroy the sharks’ breeding or resting places.

Dr Simon Berrow of the Irish Basking Shark Group who co-led the field research says, “Our discovery of important basking shark courtship grounds in coastal waters off western Ireland makes it even more urgent that this species gains protection in Irish waters from potential threats, such as collisions with marine traffic and the impact of offshore renewables.”

The research team also hope their findings can inform identification of other basking shark courtship grounds in the UK, and further afield in the Mediterranean Sea and Pacific Ocean, to ensure appropriate conservation measures are put in place for the circling lovers.