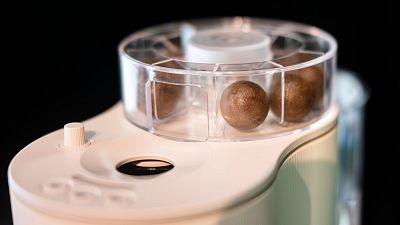 How do you take your coffee - black, white or in a ball?

For many of us, a steaming cup of coffee is an essential part of our daily routine. But aluminium and plastic pods used in coffee machines can be one of the most damaging sources of environmental waste.

‘Coffee balls’ - advertised as CoffeeB - are pre-ground, condensed spheres of coffee that dissolve in a capsule-like machine.

Head of CoffeeB Frank Wilde promises that the spheres are the ‘future’ of portioned coffee drinking.

“We believe that … plastic capsule systems will be phased out over time,” he told Daily Coffee News.

“The reason is simple: CoffeeB solves the capsule waste problem, and tastes just as good as traditional capsule coffee.

“The transition will however take time and, similar to the trend towards electric cars, a radical change won’t happen overnight.”

How do the coffee balls work?

The coffee balls are held together by an ultra-thin compostable outer layer. This layer doesn’t dissolve and is extracted with the coffee grounds prior to drinking.

The spheres must be fed into a specialised machine known as ‘the Globe.’ Though it operates on a similar premise, it’s a completely different system to appliances from existing capsule giants like Nespresso, Lavazza, Illy, and Keurig.

The spheres come in different sizes, and can each brew between 40 and 110 millilitres of coffee.

CoffeeB launches in Switzerland and France this week with expansion into Germany is planned for 2023. A pack of nine Coffee Balls will cost from €4.70 (4.60 CHF in Switzerland.) The Globe machine will cost €175.

How bad are normal coffee capsules for the environment?

In the past decade, coffee pods have quickly taken over the world. Globally, around 39,000 capsules are produced every single minute.

But of this number, a mammoth 29,000 end up in landfill. The single serve packaging - usually constructed from plastic or aluminium - takes a mammoth 500 years to decompose.

Brands have developed some recyclable alternatives, but many of these still end up being thrown away with regular waste as the recycling options aren’t easily available. Users have to return the pods to special recycling points, or arrange for them to be picked up as part of dedicated services such as PodPack.

If you have a capsule coffee machine, using compostable pods is a better choice for the environment. These can decompose in less than two months.

Another option is to buy reusable stainless-steel pods that can be refilled with ground coffee over and over again. The bonus for this system is that you can pick whatever beans you want rather than relying on pre-packaged choices.