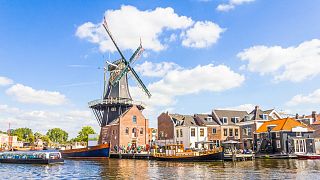 The Dutch city of Haarlem is putting a ban on some meat advertisements in public spaces.   -   Copyright  Canva
By Nicole Lin Chang  •  Updated: 12/09/2022

The Dutch city of Haarlem is putting a ban on meat advertisements in public spaces, in what is being hailed as a world first.

The ban, which is hoped to come into force in 2024, aims to reduce meat consumption and the impacts of the climate crisis.

It follows similar prohibitions by other Dutch cities on advertising from fossil fuel and aviation companies.

Which types of meat are targeted by the ban?

Ziggy Klazes, a councillor from the GroenLinks party which introduced the motion, says the ban is only intended for some types of meat.

“We want to ban advertising for meat, but not all meat - just the meat that comes from the big meat industry, industrial farming,” she tells Euronews Green.

Such ads will not be allowed on ad spaces controlled by the city government, such as bus stops and shelters.

The motion, which was introduced by GroenLinks last November, was passed by Haarlem’s council this week. It will now have to undergo further scrutiny before coming into effect.

Why is Haarlem banning meat adverts?

“By this, we’ve given our commitment to do everything in our local power to not contribute to global warming,” she says.

Earning money by renting out ad space to industries that have a negative effect on the environment would seem to contradict this goal, she says.

“If you do all that, it’s kind of strange to earn money by renting out your public spaces to companies that do the exact opposite,” says Klazes.

“I suppose you could call it moral integrity - if you’re actually committed to doing all you can to stop global warming, this is part of it”.

As part of the same motion, Haarlem is also banning ads in public spaces from other polluting industries, including holiday flights and fossil fuel companies.

But not everyone has welcomed the move.

Sander van den Raadt, the leader of the Trots Haarlem group, has told the Guardian that the move is “patronising”.

“It is remarkable that the municipality of Haarlem is holding a large poster campaign that you can be yourself in Haarlem and love whoever you want, but if you like meat instead of soft grass, ‘the patronising brigade’ will come and tell you that you are completely wrong,” he says.

Klazes stresses that officials are not telling people what to do.

“We’re not trying to take away anyone’s right to eat meat,” she says.

“We are not telling people, ‘do not eat meat.’ It may be lovely if everyone stopped eating meat, but that’s not up to us”.

Is meat bad for the environment?

Research has found that food production contributes more than a third (about 37 per cent) of the world’s greenhouse gas emissions, with meat in particular causing about twice the emissions of other types of food.

Emissions from livestock represent 14.5 per cent of all man-made greenhouse gas emissions, according to the United Nations, with cattle responsible for the most emissions (about 65 per cent).

How is the Netherlands affected by climate change?

Climate change has large consequences for the Netherlands. In particular as a low-lying country, Dutch coasts are set to notice the effects of rising sea levels sooner rather than later.

A record 12.2% of the EU’s electricity came from solar this summer