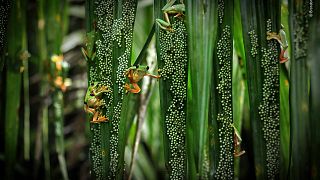 A disappearing giraffe, an unusual rabbit encounter and a curious whale are among some of the highly commended images that have reached the final stretch of this year’s Wildlife Photographer of the Year.

Now in its 58th year, the competition strives to highlight the beauty of nature, our place in the natural world and the responsibility we have to protect it.

Dmitry documents polar bears taking over the small island of Kolyuchin, in the Russian High Arctic.

Humans left this abandoned settlement in 1992 and the photographer says he was surprised to see movement when his boat approached the island. He spotted more than 20 bears exploring the ghost town and captured this shot using a drone.

Jose followed this giraffe on a moving vehicle, between the giant pillars of Kenya’s new Standard Gauge railway, to capture this image.

It shows the stark contrast between the natural world and human infrastructure - something that is rapidly encroaching on the habitat of wild animals.

Srikanth’s photo is a sobering look at the scale of unsustainable fishing. It uses a drone to show the marlin and sailfish on offer at a fish market.

As top predators, these species are essential to marine ecosystems.

Mass treefrog breeding events only occur in a few remote locations a couple of times a year. Thousands of females arrive at dawn in the pool to mate, laying their eggs on overhanging palm fronds.

Brandon waded through chest-deep murky water in Osa Peninsula, Puntarenas, Costa Rica to capture this image of the rare occasion.

Britta uses torchlight to highlight the impact of coltan mining. This metallic ore is used to make components for phone and laptop batteries.

It is extracted from riverbeds in the Democratic Republic of the Congo by poorly paid miners who hunt wildlife for food. Hunting and trading threaten wildlife in the region, including the country’s population of gorillas, and have led to an increased risk of viruses jumping to humans.

Burrow mates by Morgan Heim, US

This intimate encounter between a rabbit and a beetle was captured by Morgan, in the Columbia Basin, Washington, US.

The photographer set up camera traps to observe the comings and goings of pygmy rabbits in the region. The small isolated population of this species was facing extinction until conservationists intervened, boosting their numbers.

This young southern right whale took an interest in Richard, circling him for around 30 minutes in Port Ross, Auckland Island, New Zealand.

The species was hunted to near extinction by European whalers in the 1800s, then again by Soviet whalers in the 1900s. Now protected, the population has bounced back from a group with just 13 breeding females to more than 2,000 individuals.

Where can I see the winners of the Wildlife Photographer of the Year competition?

Wildlife Photographer of the Year is developed and produced by the Natural History Museum, London. This year, the competition attracted entries from photographers of all ages and experience levels across 93 countries.

The winner will be revealed during an award ceremony hosted by TV presenter and conservationist Chris Packham on 11 October. The Wildlife Photographer of the Year exhibition opens on 14 October in London featuring 100 photos that illustrate the beauty of our planet.

“'Captured by some of the best photography talent from around the world, the 100 photographs encourage curiosity, connection and wonder,” says Dr Doug Gurr, Director of the Natural History Museum.

“These inspiring images convey human impact on the natural world in a way that words cannot - from the urgency of declining biodiversity to the inspiring bounce back of a protected species.”