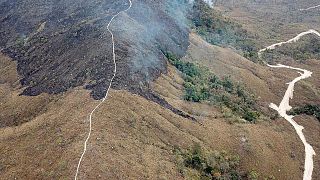 August has been Brazil's worst month for fires in more than a decade. That's according to the Brazilian Space Agency, which says its satellites recorded more than 33,000 blazes in August this year, compared to 28 thousand in the same month of 2021.

The South American rainforest is considered a key buffer against global warming.

As well as the destruction from flames, Rómulo Batista from Greenpeace Brazil says they have also detected a record amount of deforestation in the first half of this year. "It was the highest in numbers of deforestation alerts in the last 15 years. From January to August, fires increased 18 per cent compared to last year."

Locals also complain of a drop in air quality. According to experts, fires are mainly caused by farmers who illegally clear land by burning vegetation.

Joyce, an administrative assistant who lives in Porto Velho, in the Brazilian state of Rondonia, said the fires in 2022 have been noticeably bigger, "so the sunrise was extremely cloudy with smoke, the sun is very red, very hot, horrible days."

Forest clearing is at an historic high after three years of continued increase in Brazil. President Jair Bolsonaro, an agribusiness ally, faces international criticism for a surge in Amazon destruction on his watch.

Bolsonaro eager to leave 'horrible' quarantine after getting COVID-19