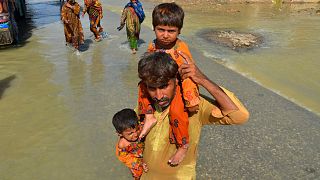 One-third of Pakistan has been engulfed by historic flooding.

Officials estimate that 33 million Pakistanis - one in seven - have been affected by the climate-driven catastrophe, which has claimed the lives of at least 1,136 people since the “monster” monsoon began in June.

"It's all one big ocean, there's no dry land to pump the water out," climate minister Sherry Rehman told AFP. “Literally, one-third of Pakistan is underwater right now, which has exceeded every boundary, every norm we've seen in the past.”

The UN has today launched an appeal for $160 million (€159.6 million) to help Pakistan cope with the catastrophic floods which have wiped out homes, roads and crops, causing more than $100 billion worth of damage, according to the government’s early estimates.

“The Pakistani people are facing a monsoon on steroids - the relentless impact of epochal levels of rain and flooding,” says UN Secretary-General António Guterres.

With the South Asian country responsible for less than 1 per cent of global emissions - compared to the US’s 13 per cent - the devastating images and reports from Pakistan are a stark record of climate injustice, prompting calls for far greater action from historic emitters to provide immediate aid as well as climate finance.

Pakistan is used to monsoons and downpours, but this year is anything but usual. The rain is running at more than 780 per cent above average levels, explains Abid Qaiyum Suleri, executive director of the Sustainable Development Policy Institute and a member of Pakistan’s Climate Change Council.

People usually have some respite from the skies. “Neither is it so prolonged,” says Rehman, “It’s been eight weeks and we are told we might see another downpour in September.”

And Pakistan is being hit with another source of flash flooding: extreme heat is speeding up the melting of Himalayan glaciers, sending the floodwater from burst glacial lakes cascading into the country.

But while scientists agree that the deadly floods are “being juiced by climate change,” as Massachusetts-based Jennifer Francis puts it, researchers need a few more weeks to calculate its exact role.

How Pakistan’s poor infrastructure has made the floods worse

Not all of the problem is climate change, however.

Disappearing river banks have imperiled many lives. “You can’t predict when they are going to fail, and people living in an area where they think they’re protected might not expect that they need to evacuate,” Dr Liz Stephens, associate professor of climate risks and resilience at the UK’s University of Reading told the Guardian.

Deforestation could also have increased the speed of rain runoff in places, Stephens added.

Alongside the UN’s flash appeal, a number of aid organisations have issued pleas for help from inside Pakistan.

“I’ve met so many families who fled for their lives just minutes before the floods arrived and they have lost absolutely everything they owned - their homes are destroyed, their livestock are dead and their crops are ruined.

Thousands of families are lining the sides of the main roads, he says, congregating on higher ground in the hope of receiving aid in the form of food, tents, cash and hygiene kits.

WaterAid is also on the ground, having allocated PKR 30 million (more than €136,000) for initial emergency relief which will go towards disinfecting drinking water sources, building temporary toilets in schools and camps and helping clear the flood water.

“It is clear that this is a massive humanitarian and climate emergency. Children are always the worst affected,” adds Save the Children’s Pakistan country director Khuram Gondal.

One third of those killed in the floods are believed to be children, Pakistan's foreign minister Bilawal Bhutto-Zardari said.

Calls for urgent humanitarian aid have been combined with powerful messages on the need for greater climate action.

“As we continue to see more and more extreme weather events around the world, it is outrageous that climate action is being put on the back burner as global emissions of greenhouse gases are still rising, putting all of us - everywhere - in growing danger,” Guterres said via video message.

“Let’s stop sleepwalking towards the destruction of our planet by climate change.

Today, it’s Pakistan. Tomorrow, it could be your country.”