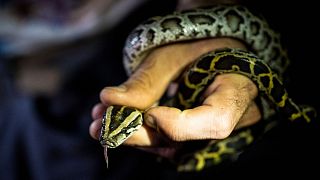 Hunting for massive pythons in the dead of night doesn’t sound particularly relaxing.

But for a group of Florida veterans coping with PTSD, it’s a form of therapy.

The Swamp Apes - an association of python hunters founded 15 years ago - disappear deep into the Florida Everglades each night.

They’re searching for Burmese pythons - an invasive species that has devastated the delicate wetland ecosystem.

"The pythons have left a great impact - negative impact - in the environment here,” says Tom Rahill, python hunter and founder of Swamp Apes.

“Where once there were thousands of animals, now it’s eerily quiet. It’s like a ghost town. It’s a desert.”

How are Burmese pythons damaging the Florida ecosystem?

Burmese pythons first came to Florida in the 1980s as a popular exotic pet.

But the snakes can grow up to five metres in length, leading some overwhelmed owners to release their pets into the wild.

In 1992, dozens of snakes escaped into the glades after a destructive hurricane destroyed a local python breeding facility.

The invasive species thrived in its adoptive home. Females can lay up to 100 eggs per year, and authorities estimate that the snakes now number in the tens of thousands.

With no natural predators, Burmese pythons have devastated local animal populations. Between 1997 and 2012 the Everglades’ raccoon and opossum populations dropped by around 99 per cent.

"People think you can just release an animal that doesn’t belong somewhere and there won’t be any consequences,” he says.

“They figure, ‘Oh what’s one snake going to do?’ But if a lot of people are releasing their pet snakes, I mean, you’ll just have a catastrophe.”

Who are the Swamp Apes?

The snakes are an intimidating adversary. But locals aren’t giving up.

A Florida government program incentivises snake-hunting, offering a cash bounty for each dead snake. More than 6,000 snakes have been killed under the program.

Many volunteers also head out to the glades, including several with the Swamp Apes.

The hunters are mostly former soldiers, who say python hunting helps them deal with their PTSD.

"We utilise the veterans’ trained skills…and we apply that in the Everglades to capture the pythons,” Rahill says.

For members like Rahm Levinson - an Iraqi war veteran and newly inducted Swamp Ape - the group is a godsend.

"It’s just been a pleasure every day going out with these guys,” he says.

“It really helped me through a lot of stuff - struggling at home, insomnia. I can’t sleep at night, so having someone to go out [with] at 12 o’clock, two o’clock in the morning to catch pythons is something productive, good and it’s really helped out a lot."