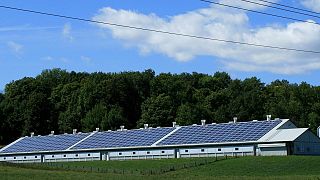 While the market for solar and wind energy sources is growing, transitioning to renewables at home isn’t easy. What happens when the sun goes in or when there’s no wind?

Solar panels and other kinds of green energy are usually backed up by other sources. These are needed to safeguard our power when the weather isn’t cutting it. We all want to be able to shower - even when it’s cloudy.

Usually, lithium-ion batteries provide this backup but these are pricey, meaning that most people can’t afford to switch entirely to renewables.

Scientists from MIT have created a new kind of battery that could provide a solution for storing energy at home.

Moving away from the traditional lithium-ion model, the new battery is made from aluminium and sulfur. Aluminium is the second most plentiful metal on the planet, after iron. It is also cheap. Sulfur is the least costly non-metal element. As a waste product from petrol refinement, it’s abundant. The entire battery can be made for about a sixth of the cost of its lithium equivalent.

“The ingredients are cheap, and the thing is safe — it cannot burn,” says Professor Donald Sadoway, one of the researchers behind the new discovery.

Lithium-ion batteries, if damaged or manufactured badly, risk catching fire, or even exploding.

Because the aluminium-sulfur battery uses a salt that can’t burn as its electrolyte, it drastically reduces this risk.

The battery is ideal for use at electric vehicle charging stations and can also power homes and small or medium-sized businesses.

Reaching full charge in less than one minute. It can also last for long periods of time.

“I wanted to invent something that was better, much better, than lithium-ion batteries for small-scale stationary storage, and ultimately for automotive [uses],” explains Sadoway.

He is not confining himself to the small scale, however. Earlier in 2022, Sadoway was granted the European Inventor Award for liquid metal batteries he developed with his students a few years ago for the long-term storage of renewable energy.