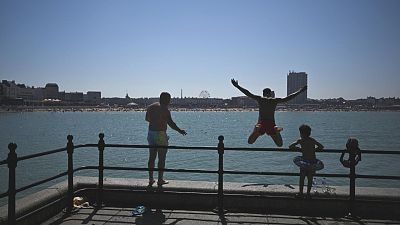 Water companies in the UK have been accused of failing to monitor the amount of sewage pumped into the sea at popular beaches across the country.

Sewage monitors installed by water companies didn’t work “90 per cent of the time” according to a recent analysis of data from the Environment Agency done by the Liberal Democrat party.

Last week, more than 40 pollution warnings were issued at swimming spots across England and Wales after heavy rain overwhelmed systems. This led to water companies releasing sewage into the environment to protect homes, schools and businesses from flooding.

Some of Britain’s most popular beaches lack water monitoring systems

This new analysis reveals that people could be swimming amidst waste without even knowing it is there. The data from the Environment Agency showed that many monitors meant to measure the amount of sewage being pumped were broken or hadn’t even been installed in the first place.

The Liberal Democrats say that around a quarter of sewage discharges went unmonitored last year due to faults or a lack of equipment. Across Cornwall and Devon, where some of the most popular swimming beaches are located, one in eight water monitoring devices was missing or not working.

Prime Minister Boris Johnson’s father, Stanley Johnson, told UK radio station LBC that he believes Brexit is to blame for the drop in water quality around the UK.

The environmental campaigner and former MP said that European regulations, which he had been involved in writing, had “transformed the quality of bathing water around the whole of Europe.”

Stanley Johnson added that “without the backing that the EU framework gave” the country faces a difficult task in cleaning up its waters.

“I think the Environment Agency does a terrific job, but it needs the backing of statutory bodies and those bodies are seriously at risk.”

Now three French MEPs are calling on Brussels to take action against the UK over the amount of raw sewage it has allowed to be dumped in the English Channel and the North Sea.

"We fear negative consequences on the quality of the marine waters we share with this country and incidentally on marine biodiversity but also on the activities of fishermen and shellfish farmers," they wrote in a letter to Environment Commissioner Virginijus Sinkevičius.

The UK was accused of "exempting itself from the environmental requirements" set out in EU legislation. The trio of MEPs stressed that the country still has obligations to keep waters clean under a Brexit treaty called the EU-UK Trade and Cooperation Agreement.

"This is unacceptable and calls into question the efforts made by EU Member States over the last twenty years," they added.

Is the quality of bathing water in the EU better?

Since the adoption of the Bathing Water Directive in 2006, the European Environment Agency (EEA) says that the number of sites with excellent quality water has been growing.

In 2021, 84.6 per cent of bathing sites had excellent quality water and minimum standards were met at 95.2 per cent of locations. The quality of coastal sites is generally better than those inland but the latest figures show improvements in the management of poor bathing sites in Europe.

The proportion classed as excellent has remained relatively stable, showing that bathing water quality in Europe has improved markedly over the last decades. The EEA says this is due to large investments in urban wastewater treatment plants and improvements in wastewater networks.

Until 2020, these figures also included the UK which consistently performed poorly in the rankings, often appearing near the bottom of the table.

In contrast, many EU member states have made drastic progress in cleaning up their bathing water quality over the last decade.

Just 40.5 per cent of sites in Belgium in 2011 were ranked as excellent - now that figure is 92.7 per cent. Denmark and Bulgaria are also among those that have risen dramatically in the rankings since 2011.

The countries with the cleanest bathing water were Austria, Greece, Croatia, Cyprus, Denmark and Germany where at least 9 out of 10 sites received the top ranking.

Can the UK clean up its swimming spots?

The UK Department for Environment, Food and Rural Affairs issued a response to the issue last week. It says this is the first government to set an expectation for water companies to significantly reduce sewage discharges from storm overflows.

“We have been clear that water companies’ reliance on overflows is unacceptable and they must significantly reduce how much sewage they discharge as a priority,” said water minister Steve Double.

He added that a plan on tackling sewage overflows “continues at pace” and will be published on 1 September.