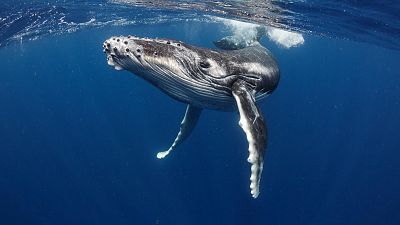 On Monday, the UN began the latest set of talks to protect the world’s oceans from exploitation in New York.

This once in a lifetime opportunity to safeguard our waters’ biodiversity has now been through 10 years of negotiations. But, if signed, 30 per cent of the world’s oceans would become conservation areas before the end of the decade.

Why is the UN oceans treaty important?

The high seas make up around two thirds of the world’s oceans. They are beyond the jurisdiction of any country meaning everyone has the right to fish, pass through in ships, do research there or even carry out deep sea mining.

Just 1.2 per cent of these deep waters are protected. This leaves the wealth of biodiversity outside of these areas open to overexploitation and the impacts of climate change.

They are also heavily under researched, meaning scientists fear that new species could be lost before they are even discovered.

The new treaty would, in the words of the UN, “address the conservation and sustainable use of marine biodiversity in areas of the ocean which are beyond the limits of States' maritime zones.”

This is the fifth - and hopefully final - set of negotiations to draft the first ever treaty on the ocean’s biological diversity.

I am hopeful that we can make real progress in these two weeks, with the aim of finalising the agreement as soon as possible.

“I am hopeful that we can make real progress in these two weeks, with the aim of finalising the agreement as soon as possible,” said intergovernmental conference president Rena Lee.

At this critical time, those leading negotiations are hoping that the countries taking part can cooperate with a focus on finding a compromise.

After 10 years, some say that negotiations are stalling because of a lack of political will. On Friday, activists gathered outside the UN in New York to express their concerns. They say that a lack of high-level ministerial engagement is slowing down progress - only one minister from France has attended talks so far.

Representatives from communities on the frontlines of ocean crisis addressed the crowd calling for more urgency and asking for a strong treaty to be finalised in 2022.

“In Mauritius, we’re already feeling the impacts of the ocean crisis. The negotiations are not moving fast enough and we need action now,” says Shaama Sandooyea, an activist from Mauritius who spoke at the rally.

Delegates are not recognising the urgency of the situation, and are spending hours debating minor points that were put to bed decades ago.

“Delegates are not recognising the urgency of the situation, and are spending hours debating minor points that were put to bed decades ago.”

Sandooyea added that delegates are failing island communities and future generations. Greenpeace reports that some delegations from the Global North have refused to make concessions to meet the needs of those in the Global South.

The representatives shared first-hand experiences of how their communities are already feeling the impact of the ocean crisis with the activists.

Anta Diouf, a fish processor from Senegal, said that she was sad not to have been able to take part in the negotiations due to a delay with her visa.

“I would have liked to participate in this meeting in order to bring the voice of the women processors of Senegal.”

Environmentalists fight to save rare fish only found in Romania

Is it OK to eat fish if you love the ocean? We asked the experts