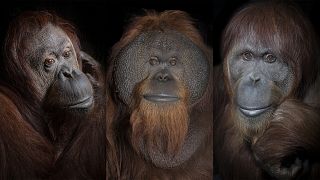 One photographer has proven that eyes really are the window to the soul in these critically endangered great apes.

Mark Edward Harris' photo series 'Orangutans On a Thin Vine' shines a light on a species whose future is particularly uncertain as habitats of these majestic primates are disappearing rapidly.

As a talented (human) portrait photographer, Harris was inspired to create this series after learning that the striking similarities between orangutans and humans date back centuries.

The name orangutan comes from the Malay words 'orang' (people) and 'hutan' (forest).

While modern science has shown that human and orangutan genomes are 97 per cent identical, long before that the Malay people noticed the similarities and gave the name orangutan, which comes from the Malay words 'orang' (people) and 'hutan' (forest).

Orangutan populations have declined significantly over the past hundred years due to habitat loss and destruction in their native countries Sumatra and Borneo, where forests are giving way to palm oil plantations.

All three species of orangutan are critically endangered according to the IUCN (International Union for Conservation of Nature).

All three species of orangutan are critically endangered.

Frighteningly, the population on the island of Borneo has seen local extinctions as orangutan habitats are reduced to an area within the Sabangau National Park.

'Orangutans On a Thin Vine' was exhibited with other winning works at the Px3 Paris Photo Prize exhibition in Paris, October 2021.