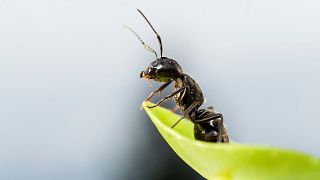 Pesticides make bees “drunk”, wreaking havoc on their central nervous systems - but many of these harmful chemicals could be replaced by ants.

These are the conclusions of two separate studies on artificial sprays used to control pests.

Worldwide, farmers use more than 2.5 billion kilograms of pesticides every single year.

Agricultural scientists have developed more than 1,000 of these chemical compounds that are tailored to preserve food supplies by killing insects, fungi and weeds.

But pesticides can be immensely harmful to insects species - especially bees.

How do pesticides damage bees?

Bees are a vital part of the ecosystem. Without them, many other species would die out. In Europe, bees pollinate 80 per cent of wildflowers.

They’re also essential for agriculture, with roughly one third of global food production dependent on these pollinators.

The chemicals impair the pollinators' ability to fly in a straight line - making it difficult for them to forage for food.

Their survival could be at risk, according to lead author Dr Rachel H Parkinson.

"Here we show that commonly used insecticides like sulfoxaflor and the neonicotinoid imidacloprid can profoundly impair the visually guided behaviour of honeybees,” the University of Oxford academic says.

“Our results are reason for concern because the ability of bees to respond appropriately to visual information is crucial for their flight and navigation, and thus their survival.”

Researchers tested bees by showing them videos of moving bars. These videos trick the creatures into feeling as though they have been blown off course.

The asymmetry between left and right turns was at least 2.4 times greater for pesticide-exposed bees than for control bees.

The bees that were exposed to pesticides also had higher proportions of ‘dead cells’ in their brains. This could mean they are being ‘brain damaged’ by chemicals in the sprays.

Hope is not lost, however - scientists are increasingly turning to more sustainable forms of agriculture.

If you’ve ever tried to have a picnic in summer, you probably think of ants as pests.

Yet a new study has found that they can protect crops from damage just as well as pesticides.

An international study - published in the Journal Proceedings of Royal Society B today - has found that many species of ants have similar or higher efficacy than pesticides, at lower costs.

Researchers looked at 26 species of ants, and found that the critters could be a ‘promising tool’ in the fight against other pests.

But it’s not a new idea, the study’s authors state.

“Citrus growers in China were pioneers in biological control using ants centuries ago,” they write.

Ants can also cause damage to crops, because they protect pests like aphids and whiteflies - tiny creatures that produce honeydew, which ants like to eat.

However, these dangers can be offset through environmentally-friendly management practises, like sowing alternative sources of sugar for the ants to eat.