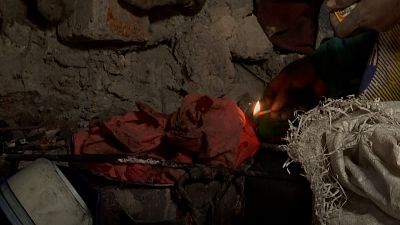 The rise in fuel prices and the cost of living crisis isn’t just affecting Europe. While many Europeans may face hardships this winter, those already living in poverty elsewhere have been hit hardest by the pandemic and the war in Ukraine.

Korogocho is one of the largest slums in Kenya, located in the capital Nairobi. Its name means 'crowded shoulder-to-shoulder.’ About 150,000 people live within the 1.5km² area.

Here many people can no longer afford charcoal or firewood for cooking. And so they’re resorting to burning plastic bags as fuel, despite the health and environmental effects.

When it’s a choice between not eating or eating surrounded by toxic fumes, what would you do?

Fuel prices have more than doubled within the last few years in Kenya, leaving low-income households to struggling to cook their meals.

Plastic sacks, also known as ‘gunny bags’ are widely available. Gladys Mburu has been selling the bags for five years and in that time has seen her customer base change. She used to mainly sell to street food vendors or food producers who used the bags to dry beans and pulses.

Now a whole sack of gunny bags goes for around €0.41 and can fuel a home for up to a month, depending on usage.

Some families can’t even afford to buy the bags. Instead, they spend their time scavenging through dangerous dump sites for old plastic carriers.

"Life has been difficult and I can't afford charcoal. I cook for my children with gunny bags that I collect from the dumping site,” says Peris Nyambura, a mother of three.

“I am afraid for my health because I get chest pains. This house has no windows, the fumes from gunny bags do not leave, it remains in this house."

Are plastic bags banned in Kenya?

You may remember reading about a ban on single use polythene bags in Kenya in 2017. Those found to be producing or importing them face hefty fines or even time in prison.

And although this was a great step in the war against single use plastics, many small traders continued to use clear plastic bags. Others began opting for polypropylene bags, which weren’t banned.

So between illegal bags, newly adapted plastics and landfill sites, there are plenty of plastic bags still to be found in Kenya.

What are the dangers of burning plastic?

The plastic ‘gunny bags’ many people use are made of mostly polypropylene. When this is burnt it releases carbon dioxide.

Bags made of other types of plastic can be even more toxic as they can release a dangerous gas called dioxin.

“It predisposes an individual to non-communicable diseases such as lung cancer and it causes skin rashes because the gas is easily absorbed through the skin,” explains Faith Muhonja, Head of Public Health at Amref International University in Nairobi.

Burning plastic can also lead to a lack of oxygen, so fatigue, dizziness and headaches are common symptoms in those exposed to the gas.

Faith also explains that dioxin can be absorbed by unborn babies in the womb or through eating meat and vegetables that have been contaminated.

Monica Wanjiru is a cook in Korogocho who has run a restaurant for the past 15 years. To cope with increasing costs, Monica has begun cooking her dishes over burning plastic.

She claims she hasn’t received any complaints since she made the transition, but the majority of her customers have no other option than to eat her food as they cannot afford to cook their own or eat elsewhere.