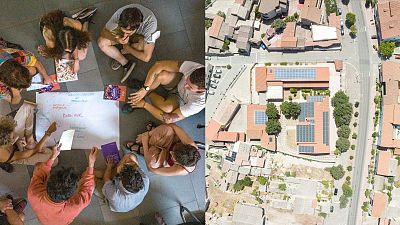 These Sardinian villages own the energy they produce. Here’s how you can follow their lead.   -   Copyright  Schirra/Giraldi
By Ruth Wright  •  Updated: 12/08/2022

One of the biggest concerns for European citizens right now is how they will pay their energy bills. In the UK, costs have soared by 215 per cent in the last year, while the EU average is a 41 per cent increase. While UK residents are clearly suffering the most, no one has it easy.

There are lots of ways to cut your bills by using less energy. But there is a more radical way. A way that builds community, saves you money and gives a satisfying feeling of self-sufficiency: community energy.

What is community energy?

Community energy is a system where citizens produce their own renewable power and share the proceeds (energy and money) amongst the community.

This is less complicated than the oil and gas majors would like you to think. The community, of any size, establishes a cooperative. A cooperative is a business model where members jointly own the organisation, rather than the capitalist model of owners and shareholders.

The new cooperative installs a renewable power system, such as solar panels, and the profits come from the energy created. All the members can then buy the energy, get a share of the profits, and they collectively decide where to invest and how to set prices.

A million European citizens are involved in creating their own energy, either as members, investors, or customers. By 2050, that could increase to 260 million people and community energy could generate up to 45 per cent of Europe’s electricity.

Sardinia saw a gap in a monopolised market

The Italian island of Sardinia was ripe for becoming energy independent as it doesn’t have gas supplies. Energy companies love to fill a gap in the market so there have been attempts to build gas pipelines here, but all have failed so far.

Whether it’s demarcating land or creating their own energy, Sardinians don’t wait on the authorities to do it for them.

On a recent trip there, I got the sense that Sardinians are self-sufficient types. The island is dotted with ‘nuraghi’, ancient stone towers built to claim the surrounding land as belonging to one community. Whether it’s demarcating land or creating their own energy, Sardinians don’t wait on the authorities to do it for them.

The solar farms in two Sardinian villages, Ussaramanna and Villanovaforru, feel like modern-day monuments to the power of perseverance.

Feasibility studies are the first step in working out if a community can create its own energy - do the buildings face in the right direction to capture sunlight? Is there an electricity cabin nearby to transport the energy to homes and businesses?

Then, if we build it, will they come? Local residents are needed as members of the cooperative, whether they sign up to use the energy generated or just by getting a share of the profits as investors.

Marco Sideri, mayor of Ussaramanna, invited his local community to a meeting in January 2021, once it was confirmed that putting photovoltaic panels on a local school would work. The main concern amongst the attendees was what it would cost them.

We’re all so accustomed to paying someone else to manage our energy supply that they couldn’t believe that becoming a member was not only free, but every household was likely to make €130 a year from what they sold to the grid.

Some were worried they’d have to agree to panels being installed on their homes. Sideri says they were “relieved to hear this was a possibility but not an obligation.”

In fact, cooperative members around Europe generally like their homes being at the centre of energy generation. While wind turbines in a nearby field can attract ire, rooftop panels that you consent to and control are a source of pride.

With their initial concerns allayed, Sideri says locals were excited to be “the hero of their own story.” Within three months of the meeting, 55 households and 5 local businesses had signed up. By November, the panels had been installed, paid for with EU money.

Here’s the kicker: the panels are still not connected up to the grid in either of the Sardinian villages due to bureaucratic delays. In the mean time, the solar power generated can only be used to power the buildings they’re mounted on, known as self-consumption. In Villanovaforru, where the panels are mounted on a school, this amounts to just 5 per cent of the energy the building uses.

The utility company responsible, Enel Group, say that Villanovaforru has now completed all the paperwork and will be connected up to the grid "in the upcoming weeks." They say "the municipality of Ussaramanna still has to send some documents."

Along with democratising energy production, community energy projects often create green jobs locally. This is a breath of fresh air in Sardinia, where young people rarely consider staying on the island once their education is finished.

Community energy is a local solution to a global problem

The benefits of community energy extend far beyond the local area. Transitioning away from fossil fuels is a key part of fighting the climate crisis.

The outdoor clothing brand Patagonia calls community energy “a critical climate solution.” They have directly funded projects around Europe and encourage citizens to start more through their rousing short documentary ‘We The Power.’ In the open and generous spirit of the brand, it’s free to watch and can be screened without permission.

What does a clothing brand have to do with energy production? Well, they use a lot of it themselves of course, in their shops and offices. As you’d expect, they’ve got their own house in order, with the majority of the power they use coming from renewable energy tariffs and some of it even bought directly from community energy providers in Italy, Germany, Ireland and France.

Patagonia say, “We know that the predominant model of big energy companies and fossil fuel production must be changed if Europe is to have any chance of getting to the net zero CO2 emissions level required by 2050, in order to stabilise climate change at 1.5°C.”

How can you start your own community energy project?

If you want to try and start your own project, you won’t be alone. There are lots of organisations who’ll provide free advice and support.

If you are in continental Europe, Rescoop is the best place to start. They are the European federation of 1,900 citizen energy cooperatives, representing more than 1.25 million citizens.

“Don't waste time struggling with problems that someone else has already solved” is their mantra. So they pass on best practices from energy cooperatives around the continent. They have a great guide to reclaiming power, produced with Friends of the Earth and Patagonia, and available in nine languages. Here are existing energy cooperatives within your country.

In the UK, it’s a trickier situation as community energy projects currently can’t sell the energy they generate directly to local people. They have to sell it to a utility company who then sell it on to their customers. This is despite the huge potential there is for community renewable energy to benefit local economies in the UK.

Power for People is a UK NGO campaigning for a rapid transition to 100 per cent clean energy. They have drafted the Local Electricity Bill which would give electricity generators the right to become local suppliers. You can support the bill here.

What if you can’t start your own community energy project?

Don’t worry, you often don’t need to live in the area where the local energy project is to become a member or investor. Look up projects in your country and see which you can join as a member.

Many renewable energy projects need volunteers and have paid roles available, too. Repowering install solar panels on buildings around London and do training programmes with young people and in schools, including training for green jobs. They need members, volunteers and often staff. Sign up to their mailing list to hear about new opportunities.

How to keep the lights on as energy bills rise

Getting citizens onboard with community energy requires a mindset shift. When we flick a light switch, most of us never think about where the electricity comes from. We just pay the bill at the end of the month and leave the rest to the energy giants.

Community energy flips this power imbalance on its head. Instead, energy is generated from the natural resources that surround the buildings we live and work in. Then the energy giants pay the community for excess energy that is sold to them. Members of energy cooperatives say this is a hugely empowering feeling. It’s taking back the power, literally.