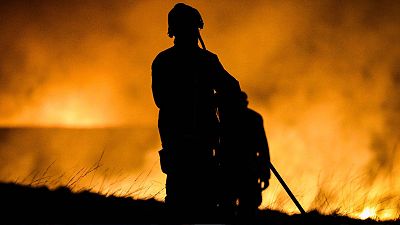 The month from hell: Firefighters are on the frontline of Europe’s climate crisis   -   Copyright  West Yorkshire Fire and Rescue Service
By Lottie Limb  •  Updated: 10/08/2022

“What the hell just happened?” Deputy Chief Fire Officer (DCFO) for West Yorkshire Fire and Rescue Service, Dave Walton, said when he got home from work on the night of 19 July.

From the northern fire control centre, Walton had spent hours triaging incidents, as more than 2,300 calls poured in on the UK’s new hottest day on record.

Two weeks on, he’s still meeting colleagues for the first time since the heatwave, and is struck by the fact that people haven’t moved on from the extreme event. Among UK firefighters, there’s a palpable sense of before and after.

“It was like a whole massive game of chess,” Walton says of that day, “trying to keep one step ahead of it, and make sure you can always deal with what comes your way.”

The UK’s fire and rescue services depend on a system of mutual aid, assuming that not everybody is experiencing the same emergency at once. But climate change is tearing through those defences. “Everywhere in England has got green open space that will burn,” he says, and 19 July was a game changer.

UK firefighters are training in hotter parts of Europe

As the charred remains of numerous disposable BBQs show, some members of the British public are still underestimating the threat. The way that fields of wheat and barley are packed together means a loose flame will “literally spread across the top of the crop at lightning speed.”

Looking back, Walton notes that humidity levels that fateful Tuesday were at 25 per cent, well below the July average of 60 per cent. “That’s where it becomes quite alien to the UK prevailing climate and takes you much more into the territory of southern Europe.”

So it makes sense that UK fire and rescue services are already training in Catalan areas of Spain. They’re learning the tactics of their continental colleagues, says Walton, including controlled and planned burns (setting fire to an area where fire is already spreading to stop it going further), which “kind of tips the UK response model on its head.”

In Italy, colossal wildfires are ‘changing the way firefighters move’

It’s different in Tuscany too, a far fiercer frontline than UK moors. Giancarlo Gori, a fireman since 1997, says the Italian region has already seen three big fires this year - which they count as spanning more than 500 hectares. During the last 10 years, these huge forest fires occurred on average once a year, if at all.

The worst blaze so far broke out in the hills of Massarosa, near the small town of Lucca, on the night of 18 July and lasted for almost a week. Around 1,000 hectares in total were torched.

As it spread, they had to contend with different kinds of fires as cars and houses also went up in flames, and liquefied gas tanks exploded.

The wind caused it to switch course with ferocious speed, sometimes doubling back on the firefighters. “More than once, because of the change in wind direction, we were forced to mount the truck to escape because the fire was following us,” says Gori. With the dry earth igniting quicker than ever, they have a new instruction to stick close to their vehicles.

“Climate change is changing the way firefighters move,” he says.

“At the end of this big fire, when the situation was under control, I could feel how frightened the villagers were.” The workers were scared too, “moving in the dark, afraid of falling down.”

Gori says that understaffing is putting people into more pressured situations. “We’re very stressed due to working for 12 hours in emergency situations, sometimes eating next to the fire. This is very bad for our health,” he adds, “so it’s quite heavy to bear.”

What impact is climate change having on firefighters’ health?

Firefighters are right to be concerned for their mental and physical health. On 1 July, the International Agency for Research on Cancer (IARC), part of the WHO, determined that their job is ‘carcinogenic to humans.’

There is already a wealth of evidence of the links between firefighting and cancer. And, the IARC notes, “In some settings, firefighting exposures have become more prevalent over time, because of the impacts of climate change.”

“Cancer is a pandemic for us, because there are very small particles that can penetrate our PPE and get under the skin,” says Raffaele Cozzolino, another operative firefighter based in Naples.

A colleague is now suffering from amyotrophic lateral sclerosis - a progressive nervous system disease, which some studies show firefighters are more at risk of developing. “I am watching him lose his life very slowly,” says Cozzolino.

Uncertainty about their chances of getting ill is itself taking a toll on firefighters’ mental health. Through their union, the Italian General Confederation of Labour (FP-CGIL), they are urging the government to compile and publish statistics on the number of fighters who develop cancer. Without such data, Cozzolino says it will be difficult to secure the legal and other protections they need.

In a recent appeal, FP-CGIL Toscana’s Giovanna Lo Zopone described firefighters not as ‘heroes’, “but workers in the flesh who need protection.” As well as calling for 4,000 more workers, they are asking for better PPE. At present, explains Cozzolino, the same 30 kilos of PPE are used throughout summer as in winter. And a lack of uniforms means they are bringing “polluted” clothing home.

Across Europe, fire services are experiencing the perfect storm of underfunding and rampant climate change.

Government spending on fire protection services has remained largely unchanged since 2001, at just 0.5 per cent of GDP at the EU level, according to Eurostat.

“We have underlined how austerity policies have hampered the ability of public services to respond to climate change,” comments EPSU General Secretary Jan Willem Goudriaan, warning that without adequate investment, “the costs will be much higher.”

In Paris, firefighter Abdellah Chaouch has observed firsthand what impact this structural underfunding is having on his workforce. There are around 250,000 firefighters in France, more than 70 per cent of who are on a volunteer rather than professional salary, earning only €4,000 a year for the role alongside another job, in most cases.

In these conditions, they are choosing to stay fewer years on average. Meanwhile professional firefighters are being asked to help colleagues in other parts of the country, forgoing their holidays for little compensation. Overworking is leading to sleeplessness and dangerous situations.

“More and more firemen are suffering from depression,” says Chaouch who leads a local section of the CGT-SDIS union in Seine-et-Marne. “I have a lot of firemen friends who have stopped their relationships with their family, and have seen a lot of divorce.”

Alongside calls for better working conditions - from the FBU to the CGT - European firefighters share an indefatigable sense of purpose. But now, Chaouch says, “You have a lot of people who want to stop this job because they say it’s enough for me. This is new for us, because this is not a normal job - it’s not just for money; I do this because I really love my job.”

Dave Walton’s birth certificate gives Birmingham central fire station as his residence, because his Dad was a live-in firefighter too. Based on his first-hand experience of the climate crisis creating “a completely different operating environment”, would he dissuade his kids from signing up to the FRS?

In a word, no. After 30 years of service he’s seen challenges come and go; now the overriding one is climate change, in its many manifestations. “Once you accept that it’s here, as a country we have to find a way to manage it. I’m of the mindset that we need good people with the right outlook to make that difference and to plan what we are going to do.”

July’s brutal heatwave and fiercer wildfires were a frightening glimpse into the future of what’s to come without urgent climate action. But firefighters are people who run towards fire, not away from it.

Before describing the health impacts of his profession, Cozzolino had a caveat: “Any kind of suffering that firefighters feel is secondary because we have a very clear mission which is to defend citizens.”

On climate change, he says, “It’s late, and if we begin tomorrow it’s later. At every level, national and international, we should run to resolve the problem of climate change.” Firefighters, he adds, are contributing their perspective at the UN level, but “every citizen must contribute.”

Thousands evacuated in southern France due to new wildfires