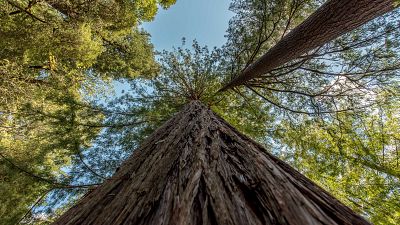 Some of the world's tallest trees can be found in California's Redwood National Park.   -   Copyright  Unsplash
By Rosie Frost  •  Updated: 02/08/2022

The world’s tallest tree is officially off limits to visitors after an influx of travel bloggers has devastated the surrounding forest.

The 115.92-metre-tall coast redwood known as Hyperion is located in California’s Redwood National Park in the US. Located deep in the park’s forests, the record-breaking tree is not accessible via any trails, meaning visitors have to fight their way through the undergrowth to get to it.

“Hyperion is located off trail through dense vegetation and requires heavy 'bushwhacking' in order to reach the tree,” California’s Redwood National Park said in a warning to visitors.

“As a visitor, you must decide if you will be part of the preservation of this unique landscape - or will you be part of its destruction?”

Why are visitors being asked not to hike to Hyperion?

Hyperion is located in a closed area of California’s Redwood National Park with no official hiking route to reach it.

“Despite the difficult journey, increased popularity due to bloggers, travel writers and websites of this off-trail tree has resulted in the devastation of the habitat surrounding Hyperion,” park officials said in a statement.

The roots of these trees grow close to the surface meaning they are vulnerable to increased footfall and their age makes them particularly delicate.

The statement adds that, while you may think you are just one person, thousands of others are “likely thinking the same thing when hiking off trail”. Even one visitor can have a devastating impact on the habitat in the area.

Employees say they’ve also found trash including human waste on the way to the site.

The park argues that it really isn’t worth risking the penalty to visit the world record-holding tree, as it is difficult to see from the ground and the trunk isn’t that impressive.

California’s Redwood National Park is home to some of the tallest trees in the world. Discovered in 2006, Hyperion is officially the tallest according to Guinness World Records.

The redwoods here grow to such great heights because of the unique conditions. The large amounts of rain, summer fog that prevents them from losing water, and temperate climate all contribute to their tall growth.

These trees also live for an incredibly long time, with Hyperion estimated to be between 600 and 800 years old.