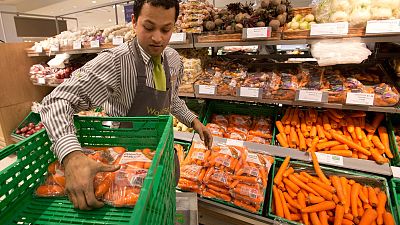 Waitrose has become the latest UK supermarket to get rid of ‘best before’ dates in a bid to tackle food waste.

The retailer announced today (1 August) that the labels will disappear from nearly 500 fresh products, including potatoes and apples, from September.

Around 70 per cent of food waste in the UK happens at home, according to climate action NGO Wrap (Waste and Resources Action Programme). It’s a similar picture across the EU, where 88 million tonnes of food are chucked each year.

Marija Rompani, director of sustainability and ethics at the John Lewis Partnership which owns Waitrose, says "By removing best before dates from our products, we want our customers to use their own judgement to decide whether a product is good to eat or not, which in turn, will increase its chances of being eaten and not becoming waste."

How do removing best before dates help cut food waste?

First of all, it’s crucial to understand the difference between ‘use by’ and ‘best before’ dates. The former indicates when perishable food can no longer be cooked and consumed safely, and ignoring this could lead to food poisoning.

Best before dates, on the other hand, refer to food quality, and suggest when a product’s taste and texture will be optimal. But there’s no need to defer to a label when you can use your own senses to decide whether an item is still edible.

"Wasting food feeds climate change and it costs people money,” comments Catherine David, director of collaboration and change at Wrap. “Best before dates on fruit and veg are unnecessary and create food waste because they get in the way of people using their judgement when food is still good to eat."

The Food Standards Agency - the UK government department responsible for protecting public health on edible matters - leaves it up to manufacturers to decide whether to apply a use by or best before date on their products.

Removing dates on fresh fruit and veg could save the equivalent of 7 million shopping baskets of food from the bin.

“We are absolutely delighted by this move from Waitrose,” says David. “We estimate that removing dates on fresh fruit and veg could save the equivalent of 7 million shopping baskets of food from the bin, which is huge.”

She adds that consumers can also cut down on waste by storing fresh produce in the fridge, and knocking the temperature dial down to 5C. Apples for example, last a whopping two months longer when refrigerated.

Cutting down on food waste also indirectly helps to ease climate change. That’s because the food that ends up in landfill is broken down by bacteria, producing methane in the process - a greenhouse gas even more potent than CO2.

Which other UK supermarkets have got rid of best before dates?

Waitrose isn’t the only retailer to phase out the unnecessary info. Last month, M&S announced it would be removing best before dates from 300 fruit and vegetable items.

Like Waitrose, it has a 2030 target - seeking to halve food waste by this time. Director of Food Technology at the company, Andrew Clappen, added that it’s about “galvanising our customers to get creative with leftovers and embrace change.”

Tesco, the UK’s biggest supermarket chain, wiped the labels off 100 products back in 2018. Meanwhile Morrisons moved to ditch use by dates from 90 per cent of its own-brand milk bottles, instead encouraging customers to use a “sniff test”.

In other dairy news, Co-op said in April that it plans to scrap use by dates on its own-brand yoghurt in favour of a best before date as guidance.

No such announcements have yet come from Asda or Sainbury’s, though the latter did try to change consumer habits with some in-store tasting booths offering food past its best before date.

What is the EU’s position on best before dates?

Having estimated that up to 10 per cent of the 88 million tonnes of food waste generated in the EU every year is linked to date marking, the European Commission is set to revise its rules.

An update on how the labels will change is expected by the end of 2022 - under the Farm to Fork strategy - following the results of an impact assessment and consumer research.

Tweaks to language, format and visual presentation are all currently on the table.

Some European countries have already taken steps to revise their labels. In Norway, the food industry agreed in 2018 to add "Best before, often good after” or “not bad after” to products, making it clear that consumers aren’t necessarily compromising on taste beyond this point.

Meanwhile Denmark is taking the fight to climate change one step further by developing a climate labelling system for food.

“We can become the first country in the world to have a state-controlled climate label,” food, agriculture and fisheries minister Rasmus Prehn said in April. “It must be one unified brand that consumers can trust, so we avoid a forest of brands that just confuse.”

Further details of the plan to help consumers compare the carbon footprint of food products are expected around Christmas.