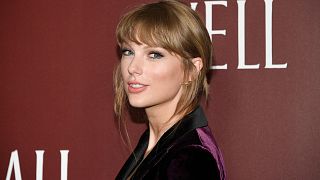 The singer's representative has responded to the criticism of her use of private jets.

Labelling Taylor as the "biggest celebrity CO2e polluter of this year so far," it was alleged that her total flight emissions for the year come in at 8,293.54 tonnes or 1,184.8 times more than the average person's total annual emissions.

The research claimed that she spent more than 22,000 minutes in the air - the equivalent of 16 days.

But a representative for the star claimed she is not solely responsible for the emissions.

In response, Taylor's spokesperson issued a statement in which they insisted that the popstar had "loaned" out the aircraft to others.

"Taylor's jet is loaned out regularly to other individuals," they commented to Rolling Stone.

"To attribute most or all of these trips to her is blatantly incorrect."

Meanwhile, Drake has also come under fire recently for allegedly taking a number of short flights in his private jet.

Responding to the criticism, the Hotline Bling rapper claimed he wasn't on the plane at the time.

"This is just them moving planes to whatever airport they are being stored at for anyone who was interested in the logistics," he wrote in the comments underneath a post about the controversy on the Real Toronto Newz Instagram account.

"Nobody takes that flight."

Kylie Jenner, also on Yard's list of the biggest celebrity polluters, came under fire last month for allegedly taking a flight on her private jet that lasted just 17 minutes. She posted a photo on Instagram with her boyfriend Travis Scott in front of their separate private jets that was captioned "you wanna take mine or yours?".

An automated Twitter account that tracks the planes of celebrities posted the route of a short journey on 12 July, attracting critics' attention.

Social media users replied to the post accusing stars of jetting around "like they're in an Uber".

The trip was roughly the equivalent of flying between Gatwick and Heathrow airports in the UK. Critics estimated that it generated around 0.24 tonnes of CO2.