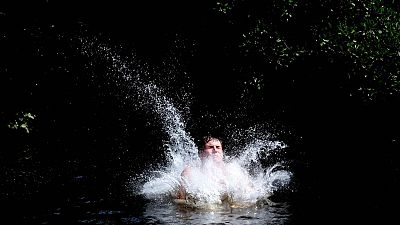 A dozen people fell seriously unwell after swimming in an English river this month, Euronews Green can reveal, in an incident that highlights the dangerous state of some of England and Wales’ most popular waterways.

George Ames, 41, visited the River Medway in Kent with his family and a group of friends on 17 July, a sunny Sunday just before the peak of the UK heatwave. Despite there being no warning signs on the bank, 12 of the 13 swimmers became badly sick, with one woman hospitalised for two days.

How a day's swim led to an 'unbearably horrible' experience

There are currently only two designated river bathing sites in the UK, despite more and more people discovering the joys of outdoor, or wild, swimming. Aside from part of the River Wharfe in West Yorkshire, and Port Meadow in Oxford, the Environment Agency has no obligation to monitor the water quality for threats to human health, or caution water-users.

However George had no reason to think the popular swimming spot he visited was dangerous.

He first visited with his family last summer. They sought out the stretch of the Medway - just past Tonbridge town, in south England - as they were anxious to avoid crowded beaches during the COVID pandemic. Arriving from south London, “It felt like a really wonderful discovery,” he recalls.

Two weeks ago, there were again “umpteen paddleboarders”, kayakers and groups of teenagers jumping into the river between Eldridge and Porters Locks. “It felt like a real treat to be in that place and to be able to enjoy our surroundings in the countryside, and have a calm, beautiful swimming spot and the children were all absolutely delighted.”

“Now it just feels like that's been totally ruined,” he says. “From somewhere which felt like a really amazing treat and a brilliant option when the weather's warm, it now feels like something we can never do again.”

Unlike in Cyprus, Greece, Austria and many other countries in Europe, most Brits are aware they take certain risks when wild swimming. Only 14 per cent of English rivers are in good ecological condition, an Environmental Audit Committee found earlier this year, due to a “chemical cocktail” of sewage and agricultural run-off. Not a single river was unpolluted.

But this was not simply the inevitable case of an upset stomach after gulping river water. All five children aged under-12 were projectile vomiting within 48 hours, while nausea, fever and sickness rippled through six adults “like dominoes” over the next few days, and one of the party was administered morphine in hospital.

One child who seemed to have recovered then fell ill again last weekend, and is missing her summer camp. Only George’s wife, who consciously tried to keep her head above the water, escaped the “grim” wave of sickness.

“Whether it's a clearly designated area or not, it is fully used,” argues George. “And we wouldn't have led our families down [the jetty] steps, and encouraged the kids to jump in if there was signage up saying ‘water not safe for swimming due to sewage discharge’ or something to make you aware of the fact that it's dangerous, frankly, to swim in.”

How do you know if a river is polluted?

“It is shocking, but it’s not uncommon. Which is why it’s even more shocking,” comments Amy Slack, head of campaigns and policy at Surfers Against Sewage (SAS).

The campaign group collects peoples’ health reports through its Safer Seas and River service, and receives hundreds of similar stories every year. “That’s just the tip of the iceberg,” suggests Amy.

SAS’s interactive map provides near real-time data on whether the UK’s coastlines and rivers are safe to swim in, by tracking real-time CSOs (combined sewage overflows) and PRFs (pollution risk forecasts). It covers water quality at more than 400 sites, but is limited by the data given by water companies and agencies.

Southern Water, which supplies water to Kent, discloses data through its ‘Beachbuoy’ reporting tool, but this doesn’t cover inland areas. The River Trust’s sewage map for 2021 shows that the company discharged a significant amount of sewage from its sewage storm overflows and treated sewage points last year. A CSO on Cannon Lane, for example, spilled 44 times for a total of 161 hours into the River Medway in 2021.

These old overflows are designed to relieve the pressure on the combined rainfall and sewerage network during heavy rainfall, to prevent homes and streets being flooded. That’s not always what happens, however, as nationally there have been countless cases of raw sewage being released on dry days too.

Southern Water and South West Water hold the lowest, one-star rating under the latest environmental performance assessment, with the former clocking up 372 pollution incidents last year - the worst by this metric.

But without accurate sampling, it’s hard to determine the exact source of a river user’s sickness. Though facilities are provided, it’s not illegal for Medway boaters to discharge their waste, and agriculture, road run-off and private septic tanks all form part of the local picture too.

“We can confirm that none of [the 210 outfalls in the River Medway catchment] made a consented (such as storm release) or an unconsented event,” a spokesperson for Southern Water said. They added, “there have been no events in our network or at our assets which could have affected water quality in the catchment.”

In response to George’s incident, the Environment Agency said, “Treated sewage is discharged to the River Medway from a number of sites in the area under environmental permits. The treatment reduces the nutrient loading to protect the environment but it does not eradicate all microbes that might cause sickness.”

It did not immediately respond to requests for comment on signage and water testing.

Are more bathing sites the answer?

To embolden the Environment Agency to crack down on polluters, SAS is campaigning to increase the number of inland bathing sites to 200 by 2030. These would join more than 600 coastal bathing waters around the UK, 98 per cent of which now meet minimum standards.

“There’s no silver bullet solution,” explains Amy, but “what designated bathing water status provides is a legal obligation on water companies and the government to improve the quality of that water in that particular area.”

Following Oxford’s success earlier this year, “there’s a whole pipeline of community groups that are wanting to get the same standards” for their rivers. And more than 33,500 people have so far signed a petition calling on the government and devolved administrations to set legally binding targets on introducing more of these blue spaces.

Because a lack of official zones isn’t going to stop people taking a dip, it’s important to know what to look out for when scoping out an outdoor swimming spot.

SAS’s map is a good first port of call to see if there have been any reported pollution incidents.

Otherwise water-users must rely on their common sense; smelly, foamy or brown water is definitely to be avoided. If you do see rivers in this condition, you can take action by submitting photos to the Environment Agency’s incident hotline.

A spokesperson for The Rivers Trust adds that low flows and high water temperatures are good conditions for bacteria to thrive and pollutants may be more concentrated. “We advise people to avoid putting their head underwater unless they are confident in the quality of the water.”