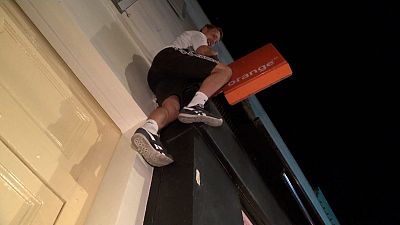 In an attempt to save energy, some young French citizens are turning off shop signs at night in an acrobatic way - a trend that has gone viral on social media.

The parkour collective, On the Spot, has been somersaulting its way around Paris at night in a bid to reduce light pollution in the city and curb energy consumption.

“Seeing so many signs lit up at night is incomprehensible to us,” a member of the group, Kevin Ha, says.

“And for us ecologists, these civic activities allow us to move from words to actions.”

The group has been praised by some local residents.

Using parkour to switch off the lights requires flexibility and determination, and the group always has respect for property, participants say.

"The idea is not to damage anything, we are a harmless movement," Ha adds.

Do French shops have to turn off their lights?

France introduced a law in 2013 that forced shops to turn off their signs between 1am to 6am or face a fine of €750.

When it was announced, the measure was expected to save 250,000 tonnes of CO2 - equivalent to the power of 750,000 French households per year.

Initially it only included cities and villages with less than 800,000 inhabitants, but this week the government announced it was extending the law to all of France.

However, up to now, enforcement has been low and many shops still don’t turn off their lights.

While On the Spot members know they cannot turn off every shop light every night, they hope their actions can be seen as symbolic and encourage shop owners to follow suit.

Why is France trying to reduce energy consumption?

Energy consumption has become a hot topic in Europe as prices have soared and supply has become more unstable in the fallout of the Ukraine war.

Energy ministers from EU countries reached a deal on an unprecedented energy plan on Tuesday 26 July that will introduce a voluntary 15 per cent reduction in gas consumption across the bloc from now until next spring.

The heatwave that recently gripped many parts of Europe also saw emissions soar. Daily carbon emissions in the bloc grew by 18 per cent between 12 June and 17 July.

The new moves by the French government are part of the country’s so called ‘energy sobriety plan’ that president Macron announced on 14 July in order to deal with the risk of shortages linked to the Ukraine war.