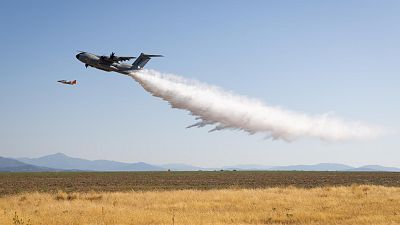 Heatwaves across Europe have led to a terrifying number of wildfires this summer.

France and Spain have seen six times as much land ravaged by blazes this year than the average over the last 15 years. In Portugal, it's three times as much.

Firefighting aircraft that drench blazes from above are essential but no EU countries have enough planes.

So Airbus has stepped in to help by converting existing planes into firefighting aircraft.

The European aircraft manufacturer has just tested a new piece of technology in Spain that it believes could help fight wildfires: a removable firefighting kit for its A400 military transporter planes.

The company says it means these aircraft can be quickly reconfigured for a “rapid reaction to unforeseen fires”.

One of the most used firefighting aircraft at the moment is made by a company called Canadair. These planes are designed specifically to water bomb blazes and can be found in fleets across the world. They have a capacity of 6,000 litres of water.

In a test this week, Airbus’s new removable kit successfully dropped 20 tonnes of water in less than 10 seconds - three times as much as Canadair’s water bombers. It can’t scoop water from lakes, however, and needs to be filled on the ground instead.

Airbus's deputy head of military aircraft says that water bombing with the A400M is not meant to compete with Canadair but complement those planes already in a country’s firefighting force.

The development of this firefighting kit is an intrinsic part of our journey towards helping to create a more sustainable and safer world.

“The development of this firefighting kit is an intrinsic part of our journey towards helping to create a more sustainable and safer world, not only by our actions but also through our products,” adds Mike Schoellhorn, CEO of Airbus Defence and Space.

“We strongly believe the A400M can play a vital role in the fight against the ever increasing threat posed by wildfires and support the restoration of social and environmental systems.”

Because of its low level flight capability and maneuverability at low speeds, the company says the A400M can accurately drop water as low as 50 metres from the ground.

French President Emmanuel Macron said last week that his country will clearly need more firefighting aircraft to keep up with the growing number of wildfires. He added that they should be part of a European fleet that can be deployed to help the 27 members of the bloc.

There are already a number of planes and helicopters pooled from member states that make up the EU’s emergency response.

But requests for assistance are expected to increase due to climate change. There have already been five so far this year - less than halfway through the Mediterranean’s June to September fire season.

Now the EU is in talks with manufacturers to buy more firefighting planes to battle the increased risk of wildfires. Though technically bought by member states, they will be funded by the EU to help bolster its combined response.

Another option is converting planes that European countries already have as part of their defence force.