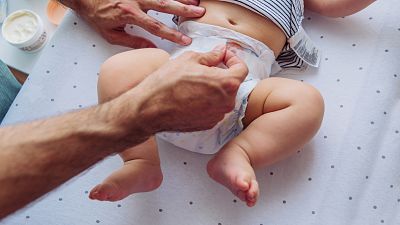 90 per cent of babies have been exposed to toxic nappies, according to a report.

First published in 2019, the research conducted in France suggests this could lead to threats of disease in later life.

An agency called ANSES tested best-selling brands of disposable nappies and found 38 “very severe hazard” chemicals in those sold throughout Europe. Most of the chemicals disrupt hormones, the officials say, which means they are not considered safe.

1,000 nappies are made in Europe every minute. The market is worth €7 billion a year and is dominated by two brands, Pampers (36 per cent) and Huggies (2 per cent).

The study estimated that over 14 million European children could suffer “potentially very severe, variable and latent diseases affecting their quality of life over their lifetime”.

This includes cancers, suspected endocrine (hormone) disruption and even reprotoxic effects (affecting fertility). Children are particularly vulnerable to chemicals, according to the World Health Organisation.

Is the EU going to ban toxic nappies from being sold?

After the research was first published in 2019, ANSES followed up by testing nine major brands. They found only one of the chemicals still present, formaldehyde, a carcinogen - suggesting that brands had at least responded in some way.

But contamination could return, so the agency asked the EU to strictly limit the chemicals in nappies.

That proposal is being resisted by EU institutions. The bloc was due to protect consumers by passing a law this week, but they missed their legal deadline.

“Every day, parents risk exposing their new born babies to toxic chemicals simply by changing their diapers. It should not be up to parents to know whether the nappies they are using may be toxic or not,” says Maria Arena, Member of the European Parliament Committee on Environment, Public Health and Food Safety and campaigner on chemical issues.

“The EU must step up and ban those substances in nappies and ensure a toxic-free environment for all.”

The European Chemicals Agency acknowledges potential risks, saying the chemicals should not be present, but claims the French researchers failed to properly demonstrate a risk to children.

However - that position is flawed, NGOs say. Yesterday, the European Commission missed a legal deadline to respond to the French proposal, stalling consumer protections for months or years.

21 NGOs, such as Plastic Soup Foundation and Client Earth, have written to the Commission saying that the health consequences to children could be irreversible and that they should ban the chemicals. Menstrual and other hygiene products are made with the same materials and also pose a danger.

Responding to the claims, the European Disposables and Nonwovens Association (EDANA) - the industry body whose members produce over 80 per cent of all disposable nappies sold in the EU - emphasised their prioritisation of safety:

“Manufacturers ensure that all products comply with all relevant European and national legislation relating to chemicals and product safety and are safe for their intended and foreseeable use,” adding that they go beyond EU legal obligations to ensure the maximum level of safety and transparency on their products.

EDANA maintains that the trace levels of contaminants found in some products are not intentionally added to nappies, and are not enough to pose a risk.