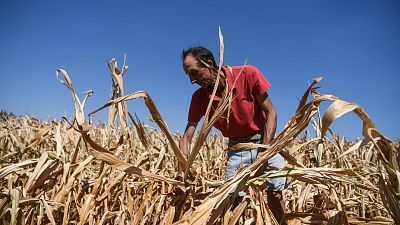 Severe drought in Italy has left farmers worried for the future as they struggle to keep their crops alive.

The northern region of Lombardy is one of the hardest hit with officials now saying water supplies for agriculture could run out before the end of the month.

“The last reserves for agriculture are running out and cannot last beyond 25-30 July,” Attilio Fontana, governor of Lombardy, told a press conference in Milan on Tuesday.

“We’re working carefully, alongside different associations - unfortunately, the only thing we can hope for is that it starts to rain again.”

The only thing we can hope for is that it starts to rain again.

If it doesn’t rain in the next few days the prolonged drought means it will be difficult to find water for growing crops, Fontana added. The situation is most critical in the basin of the alpine Lake Idro where levels are at an all time low.

Lakes Maggiore, Garda and Como still have reserves, but these will only last for a few days.

Water supplies have been dwindling in Italy as the country experiences its worst drought in 70 years. Levels in the Po River have dropped so low that seawater has started to make its way inland, killing crops.

Farmers are desperately attempting to save what they have left but aren’t optimistic about the future, saying that if the drought persists, it will do enormous damage.

Though Italy is used to droughts, Meuccio Berselli, secretary-general of the Po River District Basin Authority, said at the beginning of July that it is the “timing and magnitude” of the crisis which is frightening.

"This winter it hasn't snowed, in some locations it hasn't rained for 120 days. August weather conditions have moved forward by a month and a half," Berselli said.

Is drought impacting the rest of Europe?

More than half of the EU now faces the threat of drought, according to a July report from the European Commission's Joint Research Centre. Around 46 per cent of the bloc is exposed to ‘warning’ drought levels while 11 per cent is under the most serious ‘alert’ level.

In winter and spring, the EU saw far less rain than average with early heatwaves making the problem worse.

The report warns that France, Italy, Romania, Spain and Portugal are likely to see reduced crop yields due to water shortages and extreme heat.