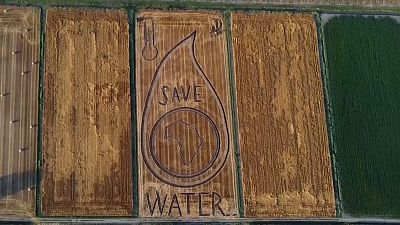 A farmer has turned to art to send a message about northern Italy's worst drought in 70 years.

Dario Gambarin created his artwork on dry wheat and corn fields in the Veneto countryside using a tractor, plough and a rotary harrow.

In one field, he carved out a huge drop of water enclosing a globe. On another, he wrote the word "water" in massive letters.

Italy is in the midst of an unusually early summer heatwave and northern regions have had barely any rainfall for around four months. The Po River is seven metres below average and suffering its worst drought since 1952.

The Italian government on Monday declared a state of emergency for much of the rain-parched north, freeing up €36.5 million in funds for the heavily agricultural regions.

Some cities and towns in the north, including Verona, in Veneto, have put restrictions on water use.

"The images speak for themselves," declared Gambarin, in a statement released to the press.

Gambarin, born in Verona in 1958, has previously produced several land-art pieces, many focusing on environmental issues such as COP26 Glasgow, radioactivity, and environmental activist Greta Thunberg.