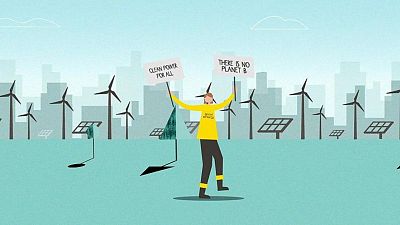 Good Energy is a 100% renewable electricity and gas supplier, which recently topped a ranking of the most eco-responsible UK energy providers   -   Copyright  Good Energy
By Diego Giuliani  •  Updated: 24/06/2022

Today, most energy providers offer so-called 'green tariffs' but what that really means can vary between 100 per cent renewables and absolute greenwashing.

Officially, greenwashing is when a business or a company shares false or misleading information about its sustainable initiatives for the sake of marketing.

Kit Dixon is the policy and regulation manager at Good Energy, a 100 per cent renewable electricity and gas supplier. Recently the company topped a ranking of the most eco-responsible UK energy providers.

He remembers the case of one British provider that jumped overnight to 100 per cent renewable products from 3.7 per cent - just after it had been acquired and rebranded by a bigger company.

Buying £750,000 (€874,395) of certificates for units of renewable energy, called REGO, they added them to their fuel mix and started to say they were a renewable energy provider.

"Many providers say they are 100 per cent renewable, but they've done no work to contract with renewable generators, they haven't built any generation," Dixon says.

What are REGO and Guarantees of origin?

REGO are electronic certificates issued for any unit of renewable energy produced, to provide proof of its “green sources” and track it up until its final consumer. They are the British equivalent of the European Guarantees of Origin (GoOs).

The price of GoOs or REGOs is determined by the demand on the market.

Since all electricity, whatever the source, is mixed when it is added to the grid, "what comes out of my socket is the same as what comes out of my neighbour’s socket, who uses no green energy," says Adam White, secretary general of RECS International, a Dutch non-profit foundation, representing electricity market players.

The Guarantees of origin basically set up a contract between the consumer and the renewable energy producer, who gets paid for his work

"But through this scheme, a contract is set up between the renewable energy producer and the consumer, the latter basically paying the former."

GoOs supporters believe that such a scheme generates a positive cycle.  Generators get paid, the demand for renewables grows and further investments are encouraged.

Their critics claim that they allow also providers mainly relying on nuclear or fossil sources, to label their energy as "green".

Most traditional providers offer green electricity and sell green electricity. But reinvesting their profits in the generation of further renewables is not part of the deal with the consumers

"As a consumer, you could expect in return that those companies reinvest your money to increase their production of green electricity and foster renewables, but it’s not part of the deal with the consumers."

How do you find the greenest energy tariffs?

Finding the difference between 100 per cent renewable providers and less impactful ones is often not easy.

"Consumers who are really into the topic can manage it," says Kromey.

"But if you just tap 'green energy' in a search engine, you’ll be directed to tariffs trying to be green, but actually supporting fossil or nuclear energy".

Most insiders agree on one point: "The greenest way to sell renewables is to make sure most of the income goes to the energy generators."

Gianluca Ruggieri is the vice-president of ènostra. With almost 10,000 members, it is the biggest Italian cooperative producing and supplying only renewable energy.

"We are basically a group of customers who have come together to defend our interests with an ethical approach," he says.

"We don’t go for a project just because it’s renewable. It also has to have a relevant ecological impact."

Many big energy providers traditionally focus on nuclear or other sources, with renewables representing just a small part of the business.

It’s like shopping in a supermarket: you can find organic food, but it accounts for just 10 per cent of the products.

"It’s like shopping in a supermarket: you can find organic food, but it accounts for just 10 per cent of the products," says Ruggieri.

"Some companies also provide renewable energies, but this is just a small share of their overall sales. Other suppliers only deal with renewables, but it doesn’t always make good business sense.

"And then there are cooperatives like ours, dealing only with renewables and sharing values and profits with their members".

This article has been produced in association with Icons Innovation Strategies in the frame of a special coverage, focusing on the REPowerEU Plan, the plan recently approved by the European Commission, to stop the European dependence on Russian fossil fuel and counter the climate change.