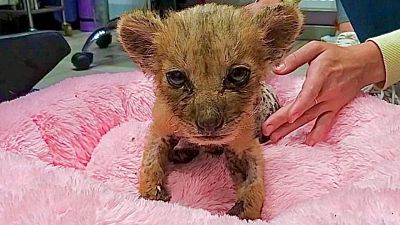 As a tiny cub, Simba was found, abandoned and emaciated, in a cardboard box in a deserted garage, near Moscow.   -   Copyright  Born Free Foundation
By Alasdair Sandford  •  Updated: 23/06/2022

A young lion is beginning a new life at a wildlife sanctuary in Italy after being found abandoned as a cub in Russia.

According to Born Free Foundation, the cub, named Simba, was saved from the illegal wildlife trade.

Simba was emaciated and mewling in distress when he was discovered in a cardboard box in a deserted garage near Moscow in 2020.

Just weeks old and lacking most of his fur due to a skin condition, he was so weak he could barely stand.

Simba was emaciated and in distress when he was discovered in a cardboard box.

"While little is known about how Simba ended up in such desperate circumstances, it is likely he is an innocent victim of the cruel wildlife trade and was discarded due to his poor condition," says the Born Free Foundation, which helped organise the lion's journey to western Europe, just months before the outbreak of war.

The young cub was rescued by volunteers in the summer of 2020 in the Moscow suburbs.

He was taken to the Wildlife Hospital Foundation, where he was cared for and nursed back to health.

But enclosure space was insufficient: Simba needed a new home.

Born Free was contacted and embarked on planning a better life for the lion. Hours of evaluation and care went into the operation involving specialists from wildlife centres in three countries.

Born Free has rescued many other lions over nearly four decades.

Earlier this year it re-homed four circus lions known as the "Lions of Lockdown", taking them from France to the Born Free sanctuary at Shamwari in South Africa.

Simba was transported to Natuurhulpcentrum Wildlife Rescue Centre in Belgium in December 2021.

While the specialist team there looked after him, Born Free lined up a permanent home for him, at Animanatura Wild Sanctuary in Tuscany, Italy.

He has now arrived and is being housed in a temporary enclosure, while a new, purpose-built area is constructed — for which Born Free has launched an appeal.

"Born Free has always championed the importance of every individual wild animal. Simba is a symbol of that. He is an example of why saving lions from the worst forms of human exploitation — from the wildlife trade, circuses, zoos, or from canned hunting facilities — is so important to us all at the Born Free family," said Born Free Executive President and Co-Founder, Will Travers.

The charity, which has named 2022 the 'Year of the Lion', says "there has never been a more crucial time to protect and prioritise" the future for the animals.

Should wild animals still be used for entertainment at the circus?