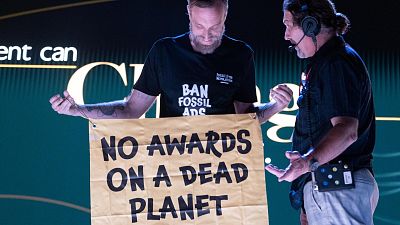 Greenpeace activist and former advertising prize winner Gustav Martner interrupts Cannes Lions opening ceremony to give back an award.   -   Copyright  © Greenpeace
The opinions expressed in this article are those of the author and do not represent in any way the editorial position of Euronews.
By Gustav Martner  •  Updated: 21/06/2022

Gustav Martner is the former head of a creative advertising agency and a previous award winner and jury member at the Cannes Lions Festival. Now a Greenpeace activist, he shares why he decided to return to the stage at this advertising event to hand his award back and call for a ban on fossil fuel advertising.

It’s day two of one of the biggest, most controversial advertising events in the world. I was once there, as a winner and as a jury member.

Last night I came back, but this time as a Greenpeace activist to return the prizes I won working for airlines and car companies - and to peacefully call for a new law that bans fossil fuel advertising and sponsorship. I crashed the party, got arrested and made it awkward. This is my story.

I received my first award at the Cannes Lions Festival of Creativity in 2007. It was for a big car manufacturer and getting recognition for the creative work was a game changer for me and the agency I was heading.

We were considered one of the best teams at promoting new cars and I felt nothing but excitement and joy when I went on stage to collect the prize. For me, the award symbolised an achievement and proof that I was doing the right thing.

But soon things started to change. Al Gore’s 2006 documentary 'An Inconvenient Truth' told me and many others that we were heading towards a climate catastrophe and that excessive fossil fuel consumption had to stop. I felt that the industry had to do its part.

So, I accepted work for Scandinavian Airlines creating an advertising campaign that encouraged people to travel by train instead of plane for short-haul distances. The ads for this idea were great and I won another prize at Cannes Lions.

This time I felt relieved, as I was convinced the system worked. Great ideas could solve the crisis. The big polluters seemed to change for the better, and they needed great ads and talent to make it happen fast.

But did they actually change? In 2015, the Paris Agreement was signed. The same year the climate criminal Shell, helped by their agency MediaCom, was awarded a Lion prize for “best corporate sponsorship”.

At that point, Scandinavian Airlines had discontinued their train collaboration to focus on selling cheap airline tickets instead and got an award for a “fun social media experiment showing that people love to travel fast.”

Since the Paris Agreement at least 300 awards have been given out at Cannes Lions to adverts promoting air travel, to oil companies that greenwash and to ads that make cars with polluting combustion engines more desirable.

Now, in 2022 - and even in the face of appalling environmental consequences, wars and neo-colonialism perpetrated by the fossil fuel industry - major advertising agencies choose to keep colluding with climate criminals. This makes them complicit in delaying the action we urgently need to tackle the climate crisis.

For the first time this year, the IPCC report clearly exposed this deceive-and-delay strategy by saying that access to media through advertising is blocking scientific work and the much needed political action.

The strategy is also to blame individuals and focus on how THEY should solve the crisis. BP’s ‘carbon footprint calculator’ inviting people to assess their own emissions is a crooked move to shift the focus to individual consumption instead of finding a solution for the systemic problems they created.

This year Canne Lions festival is promoting “Let consumers see their impact” as one of their focus areas for sustainability (you can find it under the headline “It pays to be green” on their website). Only a few agencies have internal restrictions or policies when it comes to making a profit from helping the world’s worst polluters.

Even they are celebrating it on the French Riviera.

The advertising industry is acting like the “This Is Fine” meme: enjoying their drink and acting like everything is fine, while the house is burning down.

That’s why I chose to come back to the Cannes Lions ceremony this year, took the microphone and made the advertising award ceremony awkward. Cannes Lions claims to be the ‘Home of creativity’, I’m here to say there’s no creativity on a dead planet.

I can’t accept that so much talent and money is spent on helping the fossil fuel industry literally get away with murder.

I gave the advertising industry more than two decades of my professional life. I can’t do that anymore. I can’t accept that so much talent and money is spent on helping the fossil fuel industry literally get away with murder.

Over 30 organisations have launched a European Citizens’ Initiative (ECI), calling for a new law that bans fossil fuel advertising and sponsorship in the European Union. If an ECI reaches one million verified signatures in a year, then the European Commission is legally obliged to respond and consider implementing the demands into European law.

Together we can help change the advertising industry for the better and help stop all fossil fuel ads forever.

How can we make sense of Wynn Alan Bruce's self-immolation?