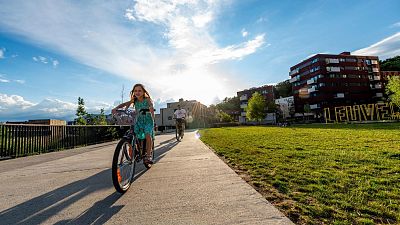 Home to 171 nationalities, the historic city of Leuven in Belgium has become one of Europe’s most climate-conscious destinations.

Winner of the European Capital of Innovation Award in 2020, the mayor’s office has been investing the €1 million prize money wisely, as it strives to make Leuven carbon neutral by 2050.

“We believe that Leuven is ready to take up an important role and become one of the most green and caring cities of Europe,” says the city’s Mayor Mohamed Ridouani.

We believe that Leuven is ready to take up an important role and become one of the most green and caring cities of Europe.

So how does this small Belgian city - most famous as the birthplace of Stella Artois - plan to do this?

Leuven 2030: A roadmap to carbon neutrality

Launched in 2013, Leuven2030 is an ambitious roadmap to help the town meet its climate goals.

The movement, which was formed with just 60 founding members, including the historic university - KU Leuven - and the City of Leuven, now has 600 members signed up to its climate pledges.

These include local businesses, civic bodies, citizen scientists and charities, all committed to making the city greener and cleaner for future generations.

“When we were founded, there was a debate about whether we should be Leuven 2030 or Leuven 2050, but we have a very important intermediate milestone, so it matters whether you go slowly towards climate neutrality or fast,” explains Katrien Rycken, Director of Leuven2030.

We want to be in the fast lane and I think we are getting there more and more. We hope to become carbon neutral way before 2050. We’re not a follower city, we're a frontrunner city.

“We want to be in the fast lane and I think we are getting there more and more. We hope to become carbon neutral way before 2050. We’re not a follower city, we're a frontrunner city.”

In order to hit their targets, there’s a 12 step plan in place, with schemes ranging from retrofitting 1,000 homes a year, to investing in solar power and depaving vast swathes of concrete.

Global events are accelerating the retrofitting scheme too, says Ridouani. “People, I think, are more sensitive to this [retrofitting] because of the energy crisis. There’s an openness to see what people can do because they think ‘okay if the city and the government can help me to make this investment, that means that my energy bill will go down.'”

To ensure no one is left behind in the push for more efficient homes, poverty organisations and social housing companies also sit on the board of Leuven2030, guaranteeing everyone has equal access to resources.

How the pandemic has pushed Leuven’s green policies forward

Elected in 2019, Ridouani’s premiership could have been overshadowed by the COVID-19 pandemic.

But far from being a stumbling block, in many ways the global crisis has further accelerated Leuven’s green ambitions.

Covid pushed us to implement a couple of our policies faster, actually. We had in mind to make the entire city centre a bicycle zone, meaning that if you ride a bicycle, a car should always stay behind you.

“It pushed us to implement a couple of our policies faster, actually. We had in mind to make the entire city centre a bicycle zone, meaning that if you ride a bicycle, a car should always stay behind you,” he says.

“We thought, this should be prepared very well, step-by-step, we will need to have a lot of debate, but in fact, because of covid we implemented it overnight.”

And luckily for Ridouani and his team, there was no backlash. “People just accepted it, because there was already that use of public space. So this is one of those examples where a crisis can be a moment where you rethink things and actually push through policies much faster.”

Leuven’s green aspirations have kept the awards flowing it too. The city has been named one of Europe’s best destinations for 2022 by the European Best Destinations (EBD) and EDEN Network.

The EBD dubbed Leuven a ‘Belgian miracle’ and went on to name it the most ‘open-minded destination in Europe’ - ahead of the usual frontrunners Amsterdam and London. While this is partly thanks to the 51,000 students that call Leuven home during their university years, the city also has a history of nurturing original thinkers.

Thomas More’s Utopia had its first print run here back in 1516, while his Humanist peer Erasmus was a professor at the university. Founded in 1425, the institution has been an innovative catalyst in the city ever since.

Leuven is a cycling paradise

Perhaps Leuven’s most successful - and noticeable - green policy though is its car reduction scheme.

As a result, Leuven is a cycler’s paradise. In fact, the metropole is the only city in Belgium where cycling is actually the preferred mode of transit, with public transport coming in second and cars in third.

In order to achieve such a striking statistic, the city implemented a radical mobility plan, as Ridouani explains.

“There was a time when you could cross everywhere with your car and park almost everywhere. So the city hall, the church, the great market. The church was a roundabout and you could park just in front of the city hall and the walls were all black because of the emissions,” he says.

“So over the years we’ve pushed that back and five years ago there was a new mobility plan, a circulation plan which was implemented where in fact we divided the city into pieces like a cake and you cannot go from one piece to another.”

In the four years following its implementation, cycling increased by an astounding 40 per cent. The mayor’s office is now aiming to reduce use by a further 20 per cent and introduce a 30 km speed limit on smaller roads too.

As a result of the mobility plan, the town centre lacks the constant hum of traffic that plagues most cities in Europe, replaced by the tinkle of bicycle bells and the gentle chatter of its diverse student population.

We captured beautiful and very striking stories of children, who, thanks to the circulation plan, were allowed by their parents to go on their own by bike to school.

“We captured beautiful and very striking stories of children, for example, who thanks to the circulation plan, were allowed by their parents to go on their own by bike to school,” says Rycken.

If you don’t fancy travelling on two wheels, thanks to the lack of cars, walking is also easy here, with most amenities no more than a 15-20 minute stroll away.

The wider region also boasts four cycling loops, taking you out of the centre and into the Flemish Brabant. If you must drive though, there are still ways to do it while maintaining your eco-credentials, as Leuven is the number one car sharing city in Belgium too.

How else is the city going green?

In order to reach its climate targets, Leuven is also investing in solar power and the reuse of raw materials - including concrete.

Leuven2030 is not just blindly imposing policies though, as Rycken explains, all of their work is the result of multi-layered analysis.

“Together with the university we are measuring the heat island effect of the warmer summers due to climate disruption,” she explains.

This layering method ensures that their policies are precisely targeted, and helps the project reach those most in need of help.

Beyond infrastructure and climate science, the people of Leuven are investing in their green futures too. At Park Abbey, a 13th century heritage site on the edge of the city, a new urban farm is giving locals the chance to invest.

“There you have one example of community supported agriculture,” says Rycken.

“You can buy a share as a citizen and then you go there and get your own vegetables and sustainable meat and milk. It’s a very beautiful example, we have several of them around Leuven.”

Encouraging sustainable, healthy eating and expanding participation in local agriculture is one of the 12 pillars of Leuven2030 and just another example of how this unique city is shaping itself.

“There’s a lot of culture, a lot of heritage and I also believe a lot of future,” says Ridouani, “it’s a really forward-leaning city.”