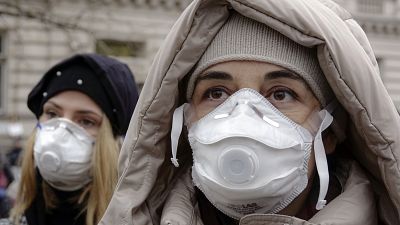 Nearly all of the world’s population are breathing polluted air, knocking more than two years off of average global life expectancy.

According to the World Health Organisation’s (WHO) latest findings, 99 per cent of people live in areas where air pollution exceeds safe levels.

The contamination chops an average 2.2 years off global average life expectancy for each person - a combined 17 billion life years.

This impact on life expectancy is comparable to that of smoking, more than three times that of alcohol use and unsafe water, six times that of HIV/AIDS, and 89 times that of conflict and terrorism.

The loss of life - calculated this month by University of Chicago researchers in their annual Air Quality Life Index report - should be treated with the same urgency as a space invasion, lead researcher Michael Greenstone says.

“It would be a global emergency if Martians came to Earth and sprayed a substance that caused the average person on the planet to lose more than two years of life expectancy,” he explains

“This is similar to the situation that prevails in many parts of the world, except we are spraying the substance, not some invaders from outer space.”

What is air pollution - and what does it do to your body?

Because the invisible pollution is airborne, it can be hard to escape. In towns and cities, the main source of such pollution is road transport, which churns out pollutants like nitrogen dioxide and particulate matter.

Other sources of pollution include burning fuel, emissions from power generation, and wildfires. Industrial factories spew out aerosol pollution, putting people who live nearby at greater risk.

Unfortunately, all this takes a dramatic toll on population health.

Microscopic airborne pollutants slip past our body’s defences, reaching deep into our respiratory and circulatory system, damaging the lungs, heart and brain.

One third of deaths from stroke, lung cancer and heart disease are due to air pollution.

Where is air pollution the worst and what can we do about it?

Air quality is poorest in South and Southeast Asia, where 99.9 per cent of people breathe unsafe air.

According to the University of Chicago researchers, residents in south Asia are expected to lose about 5 years off their lives on average if the current high levels of pollution persist.

In regions surrounding cities like Mandalay, Hanoi and Jakarta, residents are expected to lose three to four years of life expectancy on average.

It isn’t too late to fix air pollution

However, it’s not all bad, the researchers insist.

“Fortunately, history teaches us that it does not need to be this way. In many places around the planet, like the United States, strong policies, supported by an equally strong willingness for change, have succeeded in reducing air pollution,” Dr Greenstone says.

In China, pollution levels have been slowly but steadily improving since the government announced a ‘war on pollution’ in 2013.

In 2020, pollution fell by about 40 per cent. Though this can be partly attributed to the COVID-19 shut down, it also fell 9 per cent the preceding year.

If China met WHO guidelines for air-quality, residents would gain an average of 2.6 years of life expectancy.

Likewise, in the US and Europe, researchers note that “sustained enforcement of strong air pollution policies in the United States and Europe have significantly reduced particulate pollution.”

The tallest mountain in the world is melting: How can we save Everest?