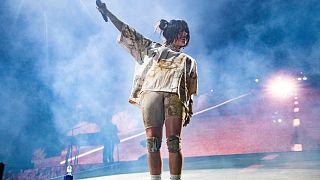 Billie Eilish, pictured at Coachella Festival this year, is putting on a climate event during the UK and Ireland leg of her world tour.   -   Copyright  Amy Harris/Invision/AP
By Lottie Limb  •  Updated: 13/06/2022

The 20-year-old singer-songwriter has made time on her Happier Than Ever world tour to co-organise Overheated, a six-day line-up of conversations with climate activists, musicians and designers at the O2. The venue has gone almost entirely vegan for the duration of the event.

She was undoubtedly the headliner for the young crowd, but took more of a backstage role.

“I’m so proud of my mum [Maggie Baird, activist and food charity founder, who played a key hosting role]. I'm so proud to be her daughter,” she said during a brief appearance.

It felt like the star wasn’t just saving her voice for the night’s show either, but stepping back to showcase an inspiring and diverse range of speakers. All were experts in their various fields of plant-based food, storytelling and sustainable fashion.

“I definitely suffer from climate anxiety and I know that so many people my age do too, and it’s overwhelming sometimes but I really just wonder if we’re doing enough.”

Born into the climate emergency, Gen-Z does not need to be lectured on the impact of global warming. This was not an event, like COP26, where impassioned speeches are hurled at the shameless force fields of politicians and corporate heads.

Instead, for a little over five hours, the audience were gently included, invited and trusted as part of vital conversations. We were given a starter pack of concepts from what ‘plant-based’ really means to the definition of ‘decolonisation’, and tips on where to start with climate action.

“Our generation, and every generation before, has never known a perfect world,” she said, “but we’ve never needed a guarantee to try and strive for one.”

From the creative fusion of Overheated - one of the best and definitely most youthful cultural-climate events I’ve been to - here are some thoughts and tips to (re)kindle your activism.

Why we need to unlearn perfectionism to be better environmentalists

“Being gentle in your heart and spirit can really go a long way,” says Isaias Hernandez, talking about the pathway to veganism. Don’t be tough and binary with your diet - especially early on, or if your living situation doesn’t allow you to be a healthy vegan. Climate-conscious changes like these involve unlearning perfectionism he says.

It’s a sentiment echoed by Samata Pattinson - CEO of Red Carpet Green Dress (RCGD) - during another fascinating discussion on fashion. She recounts the horrifying stats on the fashion industry - responsible for 20 per cent of global wastewater. But she hastens to add: “It’s not all on you!”

The pressure to buy something new, to keep up with trends and shy away from rewearing an occasion outfit is a relatable one, particularly for young women. Though it’s magnified on the red carpet, American actress Tati Gabrielle asks why this attitude can’t be reframed. It needs to be less about the garment and more “about the person wearing it, and how they’re using the clothes as a projection of self.”

Both Gabrielle and Eilish are known for their creative, DIY approach to clothing. While Eshita Kabra-Davies, founder of By Rotation clothing rental app, is doing her bit to open up our wardrobes and keep items in circulation for longer.

“It’s important that our tone is accessible and inclusive,” she says, “even to the person who still shops fast fashion.”

Again, baby steps are more valuable than unrealistic overnight change. Considering how many times you’re going to wear an item before you buy it (aim for 30 times minimum) is a good step, as well as checking the tag for materials. No matter how many times you wear something made of plastic, it’s never going to biodegrade.

‘I could never be Greta’

Alongside encouraging imperfect action, Overheated challenges our hero-worship of activists.

“I could never be Greta,” is something Force of Nature founder Clover Hogan hears a lot, and, she suggests, it’s far removed from Thunberg’s first simple protest.

“We’re all deeply imperfect,” agrees co-founder of the aptly named Bad Activist Collective Tori Tsui. She adds that change will come not from any one eco-influencer on a pedestal, but when all of us start acting together.

Dismantling individualism for community is crucial to this, though individuality is one of Tsui’s watchwords.

Towards the end of her interview with David Letterman - released on Netflix last month - the US TV host remarks that there have been one billion streams of one of Billie’s recent tracks; what he calls a ‘global number.’

“Those are people who are in need of having somebody, like you, take them through the mess that we’re living in, right? Do you ever think about that?” the host asks.

“Probably,” she says sagely, “everyone outgrows everything.” But you can’t help feeling - even if praising her misses the point - that Eilish is a star uniquely aware and well-adjusted to lead her millions of fans in the right direction at this critical moment.

“I hope you feel like you’ve found your squad,” her mother says to a cheering audience at the end of the day.