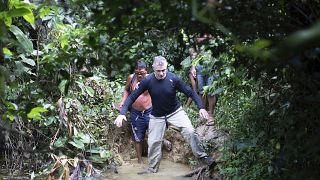 Dom Phillips and Bruno Pereira were conducting research for a book in the Amazon.   -   Copyright  Joao Laet/Copyright 2022 The Associated Press. All rights reserved.
By Hannah Brown  •  Updated: 09/06/2022

Dom Phillips, 57, is an iconic British journalist who has written extensively about Brazil after living there for more than a decade with his wife.

While travelling through the Amazon rainforest with local Indigenous expert Bruno Pereira, the pair disappeared and were reported missing on Sunday morning.

Although any intrepid, environmental expedition can have its potential perils, it appears there may be a wider, systemic problem posing a threat in the Amazon.

Criminal gangs in the Amazon rainforest

The purpose of Dom and Bruno’s expedition was to conduct research for a book by meeting local Indigenous people throughout the region.

Dom’s articles, for publications like the Guardian, have always dealt with issues like deforestation, illegal gold mining and other issues threatening both the rainforest and the people there.

And Bruno Araujo Pereira is a former government official, working for the Brazilian Indigenous affairs agency. He led the regional office, working in the Vale do Javari area, working tirelessly to protect Indigenous communities before going on leave to work on this current project.

“[Dom has] always been very concerned about human rights and particularly about environmental defence and the impact of deforestation and illegal mining on Indigenous people,” says César Muñoz, a senior researcher for Human Rights Watch who has previously worked with the journalist.

Like much of the Amazon, the area in which the pair went missing is plagued by logging, illegal mining and drug trafficking. Not only is there a huge environmental cost to these activities, the human cost is high too.

“What we see is very high levels of violence committed mostly by criminal networks that benefit from the destruction of the forest and that use violence as part of the business model,” Muñoz tells Euronews Green.

“[They] are thriving. They are destroying the Amazon at record levels. And the government, led by President Jair Bolsonaro, is doing nothing about it.”

The situation is worse with President Bolsonaro, because I think these criminal groups that operate in the Amazon feel empowered.

What is being done about the violence in the Amazon?

Prior to their disappearance, it was reported that Bruno had received threats from local criminal groups.

“We knew it was dangerous but Dom really believed it’s possible to safeguard the nature and the livelihood of the Indigenous people,” Sian Phillips, Dom’s sister said in a video on Twitter.

According to human rights specialist Muñoz, it is very common for anyone trying to protect the land to receive threats. And what’s worse, there seems to be no consequences for the gangs.

“As part of my work at Human Rights Watch, I documented scores of these threats throughout the Amazon,” explains Muñoz.

“And I didn't find a single case where there had been a real investigation into the threats.”

Research published by the Human Rights Watch in 2019 shows that more than 300 people were killed in the last decade, many of them by those involved in illegal logging, in conflicts over the use of land and resources in the Amazon.

“We are really concerned about the lack of presence of the state in those areas and the impunity from their attacks.

“The situation is worse with President Bolsonaro, because I think these criminal groups that operate in the Amazon feel empowered, feel that they have nothing to fear from the government,” Muñoz adds.

Bolsonaro became President of Brazil in 2019. Despite Brazil having signed the Paris Agreement in 2015, in his first year in office, Bolsonaro scaled back the country’s environmental laws significantly. He took power away from federal environmental agencies and harshly criticised those working to preserve the rainforest.

How can we find Dom and Bruno?

By Tuesday morning, around two days since Dom and Bruno were first reported missing, there were still no helicopters or fly-overs searching the land, according to Muñoz.

The Brazilian army stationed in the region had said they were ready to join the search but needed to receive orders from above. It wasn’t until later on Tuesday that those orders were given from President Bolsonaro.

Local Indigenous groups who know the land well have also joined the search.

Dom’s sister, Sian, took to Twitter on Tuesday morning in an emotional video to ask “if anyone can help scale up resources for the search, that would be great because time is crucial.”

"The fact that it took the authorities more than two days after their disappearance just to authorise the deployment of an aerial search is an indication that the Bolsonaro government has not taken this case seriously.

"The latest reports from the Indigenous organisations involved in the search, that the number of agents and equipment that have been sent are grossly insufficient, only reinforces this conclusion.

"It’s imperative that the government immediately uses all the resources at its disposal for a coordinated, large-scale search effort to find the two missing men. The government response, which has been clearly inadequate, has caused great anguish to the families and the loved ones of Dom Phillips and Bruno Pereira, but also to everyone involved in efforts to expose and address the violence and environmental destruction that are taking place in the Amazon rainforest today.”

Watch the video above to learn more about the search mission.