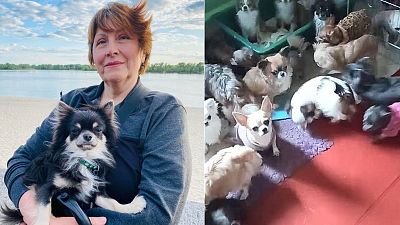 A Ukrainian woman who evacuated more than 30 dogs from besieged Mariupol has described her terrifying journey to safety.

“I had everything, a big beautiful bright house, a wonderful job, Chihuahua dogs, a business,” she recalls.

But when Russian forces attacked her city, Irina’s life collapsed.

Soldiers bombarded and encircled the town, trapping hundreds of thousands of civilians inside.

Despite the chaos, the kennel owner refused to abandon the animals in her care, eventually rescuing dozens of dogs from the hellish city.

“The most important thing is that we are alive,” she says.

How did Irina rescue so many pets from Mariupol?

The war in the Ukraine has inflicted a terrible human cost. According to UN estimates, more than 4,000 civilians have been killed since 24 February this year.

Ukrainian estimates of the death toll are much higher.

Amid the death and chaos, many refugees were forced to leave pets behind, and zoos and shelters were abandoned.

In blockaded Mariupol, the situation is particularly dire. After surrounding the city in early March, Russian forces completely isolated it from the outside world.

Irina was trapped in the city for a month, initially caring for her bedridden mother. After her mother died in her sleep, Irina says, she moved to her daughter’s house - a shelter she shared with more than 40 other people.

“People were all confused, did not know what to do,” she recalls.

“First, the light disappeared, then communication and water, the gas disappeared the last - life began to be primitive.”

Trapped in the city, people struggled to survive. Young people in the shelter would collect water from cars, boiling it for safety. Food - purchased at exorbitant prices on the black market - would be rationed out once per day.

All this time, Irina continued to care for the dogs, braving artillery fire and bitter cold to return to the shelter every few days.

After weeks of this perilous existence, Petrova managed to join an evacuation column of cars fleeing the city. She refused to leave her animals behind.

“I rushed to the dogs. I have a station wagon, folded the seats and threw dogs from all the enclosures, counted them and was very afraid not to forget anyone,” she explains.

“Before that, I walked with a stick, but here I just carried two dogs and threw them through the door into the car… we went into the unknown.”

"I just carried two dogs and threw them through the door into the car… we went into the unknown.”

A column of cars snaked out of Mariupol. The evacuees took a huge risk - the road to safety was peppered with landmines and regularly came under heavy shelling.

After three days of driving, Irina reached safety in the Ukrainian town of Zaporizhzhya. Not everyone was so lucky.

“Five cars that followed us were wrecked,” she says.

“When we escaped, saw the Ukrainian flag and Ukrainian soldiers, we cried.”

The dogs were safe - but still homeless in an alien city.

Luckily, a friend of Irina’s posted on Facebook, and offers of help flooded in. So far, 10 of the 30 dogs have successfully been rehomed.

After the ordeal they had shared, Irina found it very hard to say goodbye.

“The fact that my heart ached and my soul was torn is one thing and this is mine, but I also understood that I owe these suffering animals to give a happy life,” she concludes.

“I cried for every dog, as if I was giving away my child."

“I cried for every dog, as if I was giving away my child, fortunately no one heard.”

What’s next for the animals of Ukraine?

Without Irina Petrova’s bravery, the dogs likely would have died.

Animal rights organisation UAnimals has discovered shelters where hundreds of animals were abandoned to starve.

“When the war started, we realised every day that it's becoming worse and worse,” Olha Chevhaniuk, co-founder and CEO of the rescue force, told Euronews Green.

Irina is still looking after 20 dogs, which makes it difficult for her to find a place to live.

She is staying in a summer house with “no amenities,” ill-equipped to handle the harsh cold of winter.

She believes that her house in Mariupol has been destroyed - but pledges to return one day.

“I have nothing. Our entire street was on fire,” she says.

“There is nowhere to return, but we shall return anyway.”

How foreigners fleeing Ukraine have been left in a bureaucratic limbo