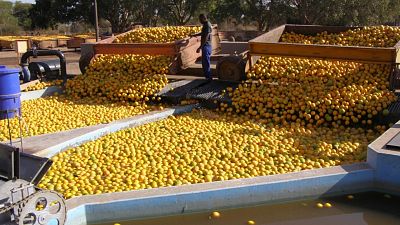 Commercial farmers in the Limpopo Basin   -   Copyright  Annelieke Duker/IHE Delft
The opinions expressed in this article are those of the author and do not represent in any way the editorial position of Euronews.
By Alyssa Offutt & Dr Susanne Schmeier  •  Updated: 02/06/2022

The Water Peace and security partnership is financed by the Dutch Foreign Ministry and is made up of the IHE Delft Institute for Water Education, the World Resources Institute, Deltares, The Hague Centre for Strategic Studies, Wetlands International, and International Alert. In this piece, Alyssa Offutt and Dr Susanne Schmeier from the IHE Delft Institute for Water Education assess the link between water, conflict, and cooperation.

Russia’s war on Ukraine has devastating consequences that span far beyond the horrific images of violence and destruction we see daily in the news.

The war is increasing the risk of global hunger by limiting exports of wheat, cooking oil and fertilizers. It has led to higher food prices and increased food insecurity throughout the world.

Together, Russia and Ukraine make up over a quarter of global wheat exports and are major exporters of cooking oil and fertilizers. The supply of these key staples has substantially decreased in recent months due to insecurity, export-limiting sanctions and difficulties to reach global markets.

To make matters worse, this decreasing supply coincides with water-stressed conditions in other major food-exporting countries - including the United States and India.

The result? Already elevated global food prices are rising and have pushed the UN Food and Agriculture Organization Food Price Index – which tracks monthly changes in the price of commodities - to its highest level since the 1990s.

In areas struggling with hunger as a result of prolonged periods of climate events and crop failure, rising food prices make a tough situation even worse.

The Eastern Horn of Africa has weathered four seasons of drought, exacerbated by La Niña and the influence of climate change. Water stress here has caused crop yields to plummet.

By the end of the year, an additional 6 million people may experience severe hunger, according to World Food Programme (WFP) estimates.

In South Sudan, three years of flooding have reduced the land available for agriculture and killed off livestock. It has created a critical situation affecting the livelihoods of farmers. More than half of the population – 63 per cent – are likely facing food insecurity and will continue to do so until July 2022, according to WFP.

In Africa and the Middle East and North Africa region, an estimated one of every three pieces of bread is baked with wheat grown in Ukraine.

The decreased exports and high food prices stemming from the war in Ukraine have worsened these already stressed conditions. In Africa and the Middle East and North Africa (MENA) region, an estimated one of every three pieces of bread is baked with wheat grown in Ukraine.

Reliance on Ukrainian and Russian imports is even stronger in some countries, with up to 85 per cent of Egypt’s wheat coming from the two. As a result of this, the war’s impacts will increase risks in regions that already struggle with water - and food -insecurity, especially as existing food stockpiles dwindle.

This food insecurity leads to widespread hunger and can further affect regional stability. Food insecurity can combine with other factors, like trust in the government and existing tensions, to trigger responses like migration, protests, and in extreme cases, violence.

Such acts can further undermine the perceived legitimacy of the government and add to destabilisation that can spread across borders.

While food insecurity does not guarantee conflict or regional instability, in several cases it has proved to influence the development of tensions.

In 2018 in Sudan, for instance, a reduction in bread subsidies tripled the price of bread overnight. This event, along with concerns about fuel prices and other grievances, sparked large protests which ultimately led to a change in leadership.

Historical bread-price related protests have also shaped policies in Egypt, including the 1977 response to a termination of food subsidies. When subsidies on essentials like flour, rice and cooking oil ended, large demonstrations broke out in cities across the country among those who were hardest hit.

While the extent and aim of protests are closely tied to other conditions in each context, in recent months, unrest has also broken out around Iran and Sudan over grain prices. Although these protests do not necessarily seek to undermine the government, they underscore the importance of addressing food insecurity to avoid an escalation of tensions.

Such responses also highlight the pressures placed on food subsidies in countries which have historically sought to reduce prices for consumers too. Several countries in the MENA region, including Egypt and Iran, already use generous subsidies to keep food affordable.

When food prices spiral upwards– as they are now – maintaining such subsidies is expensive and places a high financial burden on governments. This burden can mean they have to forgo other long-term investments like social programs, infrastructure, and water governance improvement plans that are needed to build resilience to water and food-related shocks.

Choices like these can also increase their vulnerability to changes in the global food market in the future.

Governments, therefore, face the difficult choice: should they subsidize food to alleviate some of the immediate impacts of global food prices and reduce potential public response?

Or should they prepare for a future that will be further affected by climate change and international actions?

We can mitigate and prevent conflict

Although the war in Ukraine triggered a cascade of impacts and potential instability for regions throughout the world, the outlook is not entirely bleak.

By understanding the impacts of water-related and food-related security risks, especially in the context of a changing climate, and proactively identifying areas that will suffer most from these risks, inclusive actions can be informed to prevent and mitigate conflict.

The Water, Peace and Security partnership aims to build awareness of the conditions that trigger instability to help address challenges before conflict erupts and to consider environmental factors when resolving disputes.

As part of our efforts, we use analyses and machine learning to identify potential regions of conflict, sound the alarm, and develop processes to support a global as well as a local response.

The world’s interconnected, globally influenced water security challenges demand that we pay attention – and that we act now to mitigate current and future security risks.