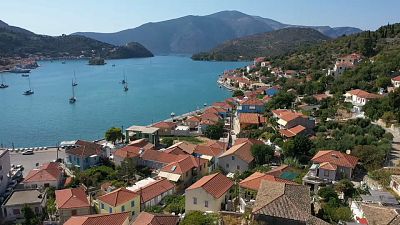 The beautiful Greek island of Ithaca is currently playing host to two groups of divers on a special mission: to clear the sea of defunct or 'ghost' fishing nets and equipment.

Normally these nets are left by local fishermen. But in the clear waters off this particular island, which was the birthplace of Homer, the problem is on a more industrial scale. The volunteers are faced with debris from two fish farms that were abandoned a decade ago, posing a potential ecological disaster.

The 'ghost nets' have sometimes been left by accident, but often dumped, in the sea near the former farms. They pose a threat to marine life that can get entangled in them even today - leading to a sinister phenomenon that the local NGO Healthy Seas calls 'ghost farms'.

When the government failed to respond to the problem, local residents took the issue online. Two NGOs decided to help, togehter with a dozen volunteer divers from the Netherlands, the United Kingdom, Greece, Lebanon and Hungary.

"The challenges of this project are the weight and the amount of the fishing nets," said Pascal Van Erp, founder of the NGO Ghost Diving. "They are very very big. We have to drag them from 20 to 35 metres.

"The lifting itself is not dangerous, but it’s a lot of teamwork because the nets are so huge. You really have to be careful so that it does not break and come down again."

The nets hauled out of the sea by the divers are stored in containers at Ithaca before being sent away for recycling.

It has been painstaking work, but the divers have made a real difference. Last year, 76 tons of marine litter was removed from the sea and coastline. Apart from cleaning, the goal of this year's action is to train fishermen, locals and visitors to reduce the catastrophic pollution of the seabed.