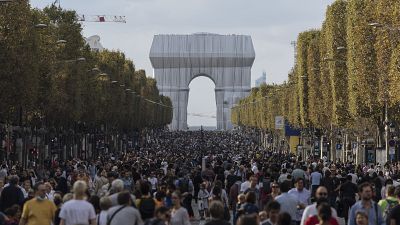 Free public transport in Tallinn. A pedestrianised city centre in Pontevedra. Reams of new bike highways to connect Berlin to its suburbs. These are some of the bold ways that Europeans are challenging the dominance of cars in their lives.

Though the changes are often met with initial outrage from a vocal minority, it’s clear that de-carbonising our cities is essential for improving residents’ mental health, combating the lethal effects of air pollution, and addressing the climate emergency.

As fuel prices keep breaking new records - reaching £1.70 (€2) per litre in the UK this week - there’s a strong financial case for ditching cars too.

Climate charity Possible has been keeping track of all the ways European cities are reimagining their transport networks. Here are some of the key themes we’re seeing and could be calling for elsewhere.

Sometimes people-friendly transport changes can be fleeting, but help us see another way.

In September 2021 the London Parklets campaign launched its first ‘People Parking Day’, encouraging Londoners to commandeer some of the city’s one million parking spots for fun and games.

“Not everyone is lucky enough to have a private garden so providing social spaces close to people’s homes is essential,” said campaign founder Brenda Puech.

In northern Spain, the city of Pontevedra banned cars from its 300,000 square metre medieval centre in the early 2000s, and its people have reaped the economic, social and health benefits ever since. CO2 emissions are down by 70 per cent, and central Pontevedra has attracted some 12,000 new inhabitants.

De-smogging Europe’s historic cities 365 days a year is a big task, but as more green schemes gain public approval, it’s a challenge the continent can rise to.