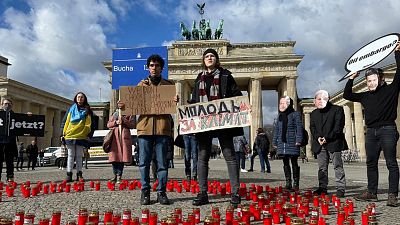 “We are fighting against a crisis that we didn’t cause,” says Ukrainian climate activist Ilyess El Kortbi.

“Now me and other activists from Ukraine, we’re in a war we didn’t start and a war mainly caused by the same reason: the climate crisis.”

When we meet, they are clutching a sign made for their first Fridays for Future (FFF) protest in 2019 in one hand and the flag of the Ukrainian FFF national group in the other. These are just some of the items they managed to save when they fled the war in Ukraine in March.

We’re standing high on the Schatzalp peak - below world leaders and business figures at this year’s World Economic Forum (WEF) in Davos are discussing the future of the planet.

In recent years, the climate crisis has been high on the agenda at the annual event, but this year, it is being overshadowed by the geopolitical fallout from Russia’s invasion of El Kortbi’s homeland.

“The war in Ukraine is founded by Europe being dependent on Russian gas, oil and coal. If Europe could have made the urgent climate action at least one year ago, consuming less energy, war in Ukraine shouldn’t have happened,” they tell Euronews Green.

For El Kortbi, the war in Ukraine and the climate crisis are inextricably linked, something that is becoming increasingly clear in discussions in Davos this week.

The 25-year-old, originally from Kharkiv, was evacuated from Ukraine as a refugee in the initial days of the invasion and is now based in Berlin.

From there, they continue to be an activist for climate justice - including for those they left behind in Ukraine. El Kortbi is attending Davos as a youth ambassador for the Arctic Basecamp, a village of expedition tents housing scientists and climate experts working and sleeping on the Schatzalp.

How are climate challenges and war impacting Ukraine?

Ukraine is considered to be one of the world’s “food baskets.” It produces grain and other cereals that feed people across the world, including in the European Union.

According to figures from the Ukrainian agriculture ministry, the country exported 46.51 million tonnes of grain - including wheat and barley - during the 2021 to 2022 season. This was around 10 per cent of the global supply.

The conflict has hampered Ukraine’s ability to export these much-needed crops. There have been calls for “safe passages” to be created to allow the grain to be shipped out to other European ports as countries that are already experiencing distress from stretched food sources are being further hit.

As well as threatening food insecurity, the war in Ukraine has exacerbated existing climate-related issues. Access to water amid droughts has gotten worse and the conflict has highlighted the significance of fossil fuels in the growing geopolitical tensions in Europe.

I don’t want to fight rich people’s wars because at any time, Europe can start using other energy and doesn’t do so.

“The European Union was built on the trade of coal and steel between former Second World War enemies for building peace. But right now, trading fossil fuels with a new dictator in Europe no longer brings peace,” El Kortbi says, adding that every day €700 million is being paid just for fossil fuels from Russia.

“We were warning them. I feel so absurd. I needed to cross a border because I can’t fight. I don’t want to fight rich people’s wars because at any time, Europe can start using other energy and doesn’t do so.”

Are world leaders and business figures in Davos listening?

The cost of coming to the event, El Kortbi explains, is prohibitive. Being able to be present at the WEF - to have a conversation about the climate - is often an insurmountable hurdle.

“I wouldn’t be in Davos without Arctic Basecamp because Davos is too expensive. I came here because they invited me and they helped me,” they say.

“In Germany, I was spreading the message. But I think big industry is trying to hush these messages.”

The normalisation of the impact of the war in Ukraine is also harming the fight against climate change. A war that was started, El Kortbi says, because of fossil fuels.

“I saw some German media saying how this is Kyiv. People are chilling, people are at cafes. Of course, they are because there is an army defending,” they explain.

The reality for those like El Kortbi is much different to the images on TV. While on their way to a conference in Kyiv, they woke up on the morning of 24 February in the capital on a sleeper train to the news of Russia’s invasion.

“I woke up in a dramatically different reality. People were silent. People were shocked. I didn’t understand,” they say. “I felt so strange as many of my friends are in Kharkiv and I was just by chance in Kyiv before the mass evacuations started.”

In Kyiv, they heard the first bombardments and the first air raid sirens. El Kortbi was having to run in and out of the bomb shelter many times a day.

“Sometimes I have these sounds of sirens and bombs and I get triggered.”

On 3 March, they crossed the border into Hungary and then on to Germany. For now, they have left their previous life behind but have pledged to continue their climate activism for those back home in Ukraine.

I see this problem of the link between fossil fuels and war in Ukraine, the new front of the climate crisis. I cannot step back.