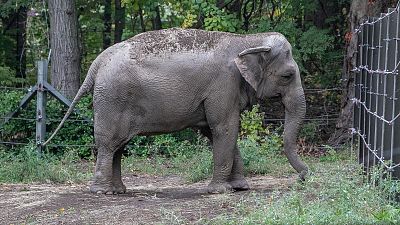 New York's highest court is about to decide whether an Asian elephant should have some of the same rights as humans and be freed to a sanctuary.

The Nonhuman Rights Project represents Happy, who has lived at the Bronx zoo in America for four decades, and says the animal is a "cognitively complex nonhuman animal" that should be freed.

The 51-year-old Asian elephant has called the zoo home since 1977. Happy has been kept apart from other elephants in a one-acre (0.4-hectare) enclosure since around 2006.

Four years ago, the Florida-based group began asking New York courts to release Happy to one of two elephant sanctuaries in the United States, saying the animal was being illegally imprisoned.

All of human history shows that the only way to truly protect human beings’ fundamental interests is to recognise their rights. It’s no different for nonhuman animals.

Nonhuman Rights Project has said that Happy is entitled to ‘habeas corpus’, a legal process in which illegally detained people or someone acting on their behalf may inquire about the reason they are being held.

New York's habeas corpus law does not define "person", and the group said Happy should be recognised as one.

Would granting an elephant some human rights mean people could no longer keep dogs as pets?

Granting human-like rights to animals may be a slippery slope, according to some legislators. Judges at the Court of Appeals session in Albany seemed to be sceptical during the hearing.

Other judges appeared concerned that expanding certain legal rights to elephants could raise other questions., "Does that mean I couldn't keep a dog?" associate judge Jenny Rivera queried.

Attorney for Nonhuman Rights Project Monica Miller replied that there is not as much evidence about dogs' cognitive abilities as there is for elephants.

"Scientists are unanimous that elephants aren't just autonomous but they are also cognitively complex and emotionally intelligent," she said.

According to a 2006 study, Happy passed a "mirror self-recognition" test, considered an indicator of self-awareness. The animal rights group argues that is among the many cognitive abilities Happy shares with humans.

Nonhuman Rights Project claims that Happy needs the companionship of other elephants.

"The deprivation of the bodily liberty is being confined and alone and in a one-acre pen," said Miller at the hearing.

Happy's longtime companion, Grumpy, was attacked by two other elephants in the early 2000s. Grumpy never recovered from the injuries and was euthanised. Another of Happy's companions, Sammie, later died.

The zoo's other elephant, Patty, lives in an adjacent enclosure separated from Happy by a fence.

The charity is opposing the zoo's claims that the female elephant "doesn’t get along with other elephants" and therefore shouldn’t be moved to a sanctuary. They say that Happy's behaviour is a result of her long captivity and can be changed over time in a sanctuary.

Prior efforts to grant legal personhood to animals, including chimpanzees, have been unsuccessful.

The Court of Appeals did not specify when it will rule.

Watch the video above to learn more about this case.