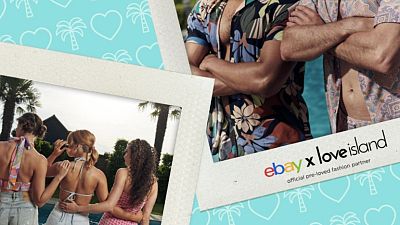 Love Island has drawn criticism for many things including its promotion of fast-fashion brands   -   Copyright  via ITV
By Tim Gallagher  •  Updated: 19/05/2022

UK reality TV show ‘Love Island’ has partnered with eBay in an effort to ditch its fast fashion image.

The series is widely viewed in the UK with audience figures in the millions and offers brands unparalleled exposure during its primetime slot.

However the show, which sees conventionally attractive singles descend on an exotic location to find love - and coincidentally gain fame and fortune along the way - has long been criticised for its promotion of a polluting industry.

This year’s contestants will wear pre-loved items from the e-commerce platform, sourced from a shared wardrobe in the iconic Love Island villa. The move is intended to help contestants find outfits that reflect their personalities, while doing their bit to extend the life cycle of clothes.

“As a show we strive to be a more eco-friendly production with more focus on ways in which we can visibly show this on screen,” says executive producer of Love Island, Mark Spencer.

“We aim to inspire our demographic and show that there are incredible finds to be had and how sharing is, in some small way, caring.”

Islanders will be styled by celebrity stylist Amy Bannerman, who has dressed celebrities such as Dua Lipa, Rita Ora, Lena Dunham and Jonathan Van Ness.

Is fast fashion bad for the environment?

The fast fashion industry is a high-carbon emitter and has been condemned in many quarters for its use of resources and high amounts of waste.

Earlier this year the EU announced that they would introduce minimum requirements for recycled materials by 2030 to tackle the fashion industry’s waste problem. Attempts by brands to make themselves more palatable have proven false with 59 per cent of claims to sustainability by major retailers found to be misleading.

The makers of Love Island are hoping that their new collaboration, which is part of a wider deal between eBay and the network ITV, will feed into a growing trend.

Research by Opinium found that one-fifth of Brits are buying more second-hand fashion compared to two years ago. Last year Cross-Border Commerce Europe found that the resale market was growing 11 times faster on the continent than traditional retail and would be double the size of fast fashion by 2030.

Meanwhile, eBay UK claims to have seen one preloved fashion sale every second so far in 2022.

“We believe that by joining forces with this incredibly influential programme, we’ll inspire the nation to think differently and make more conscious choices when it comes to their wardrobes,” says Eve Williams, chief marketing officer at eBay UK.

“Whether that is selling a dress that is sitting at the back of their wardrobe or shopping for their favourite islanders second-hand looks - these small changes can make a big difference to driving circularity.”