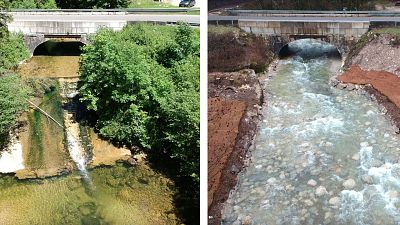 The Tacon river in France, before and after the Daloz dam was demolished   -   Copyright  Parc naturel régional du Haut-Jura PNRHJ   -
By Charlotte Elton  •  Updated: 16/05/2022

More than 200 dams were removed from Europe’s rivers last year - but some 150,000 obstacles still clog up the continent’s waterways.

A record-breaking 239 barriers, dams and weirs were removed across 17 countries in Europe in 2021.

Dam Removal Europe - a coalition of seven environmental organisations - welcomed the efforts as “key” to restoring threatened species on the continent.

Why are dams bad for freshwater environments?

As things stand, there are more than one million barriers on Europe’s waterways - roughly 0.7 barriers for every kilometre of river. At least 150,000 of these are obsolete, according to the coalition.

Migratory freshwater fish have declined by 93 per cent in Europe over the last 50 years.

This has a knock on effect on the entire ecosystem. Fish transport nutrients farther than other aquatic animals, and are food for animals like otters and birds. They also excrete nutrients that act as fertilizer for algae.

Migratory freshwater fish have declined by 93 per cent in Europe over the last 50 years.

Smashing up obsolete river-barriers is the best way to help stocks recover, said Herman Wanningen, director of the World Fish Migration Foundation, one of the Dam Removal Europe organisations.

“Dam removal is the most efficient tool to restore free-flowing rivers full of fish,” he said.

“This tool should be implemented everywhere in Europe, starting with the old and obsolete barriers that are out of use or have no economic function anymore"

Restoring at least 25,000 km of rivers to a free-flowing state is one of the goals of The European Union Biodiversity Strategy for 2030.

“The removal of these obstacles [is] not only necessary for wildlife, but also for a healthier future of our societies,” a Dam Removal Europe spokesperson said.

Which country removed the most dams?

Spain removed the most barriers, with 108 structures demolished over 2021 - including a 13 metre high dam.

Three countries – Portugal, Montenegro, and Slovakia – recorded their first ever dam removals in 2021.

Europe-wide, 87 per cent of the removed barriers were weirs, but just under a quarter of removals (24 per cent) were higher than two metres.

In Finland, a functioning hydropower dam was also dismantled, the first of three on the Hiitolanjoki River.

When the remaining two dams are removed - within the next couple of years - landlocked salmon will hopefully be able to return to their spawning grounds.

“The results of the dam removal are already visible since fish spawning nests were observed in the autumn of 2021,” the report says.

Dam removal made headlines in February, after Ukraine repelled Russian forces by opening a Soviet-era dam on the Irpin River near Kyiv.