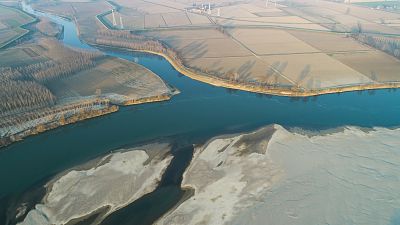 Last month, residents of Boretto in northern Italy discovered that the wide stretch of the Po River, running just to the north of their small town, had transformed into a beach.

The pale golden sand extended for around 10 metres towards the centre of the river and inhabitants took advantage of the newly formed terrain to take a stroll and walk their dogs.

In other areas, the water level dropped so low that the remains of a tank from WWII were revealed and the ruined walls of a medieval town emerged.

The Po is the longest river in Italy.

At a monitoring station in Boretto, Alessio Picarelli, head of the Interregional Body of the Po River (AIPO), received results that the Po was measuring 2.9 metres below the zero gauge height, drastically below the seasonal average.

A vital water source is at risk

Italy’s Po River flows some 650km from the snowy Alps in the northwest to the wild Po Delta in the east before rushing out into the Adriatic Sea.

During its course, the great waterway nourishes the expansive fertile plains of northern Italy where farmers have thrived for generations. Dubbed Italy’s breadbasket, these flatlands covered with crops are responsible for some 40 per cent of Italy's GDP.

At the moment, however, the normally life-giving waters of the Po River have suddenly become an unexpected threat. The dramatically low water levels of the river have been causing seawater to be sucked back upstream.

It is a serious problem for the biodiversity here, drying out the ditches and waterways.

Down in the Po Delta near the mouth of the river, Giancarlo Mantovani, director of a consortium that safeguards the regional park, explains that the water level here is higher than further upstream.

“This is because the vacuum left by the lack of river water is being filled by seawater,” he says, which can be seen flowing back upstream in some areas. For farmers in the area, it means saltwater seeping into the earth and poisoning crops, which are blackened and wilting.

“It is a serious problem for the biodiversity here, drying out the ditches and waterways,” Mantovani says.

These record-low water levels, which the AIPO would normally only measure in August, are partly a result of the lack of rainfall that northern Italy has been suffering.

“Normally it should rain once every one or two weeks,” says Mantovani, “but now it hasn’t rained for three months.”

The problems start, however, in the mountains, where snowfall has been at its lowest for 20 years measuring 50 per cent less than the seasonal average. The glaciers of the Alps, which act as reservoirs to feed the river, are also shrinking each year. On Monte Viso, a mountain close to the French border where the Po River originates, the permafrost is melting and causing chunks of rock to crumble away.

The situation has set alarm bells ringing about the effects climate change could have on an area so heavily dependent upon the river’s waters.

This season has already been a stark warning that the warming planet may turn Italy's fertile farmlands and nutrient-rich Delta into a salty wasteland, while putting hundreds of thousands of livelihoods at risk. “It is a 360-degree disaster,” says Mantovani.

The low levels of the Po River are particularly worrying as, until recently, farmers had not even begun to extract the water for irrigating their crops.

Global warming now means that the period when water from the river is required for crops has been extended, beginning as early as March and ending in September.

With a hot and sunny spring underway, farmers have begun pumping the water but, as some have discovered, what they are extracting at the moment is full of salt. It is a vicious cycle too, as with farmers now drawing water, the level of the river may continue to drop unless the weather changes soon, causing water shortages.

The drought in the Po River Valley threatens more than 30% of national agricultural production, including tomato sauce, fruit, vegetables and wheat.

“The drought in the Po River Valley threatens more than 30 per cent of national agricultural production, including tomato sauce, fruit, vegetables and wheat and half of the livestock of the country,” agricultural lobby Coldiretti said in a statement. “If the dry conditions continue, farmers will be forced to provide water with emergency irrigation.”

Rethinking the river’s role in Italy

Rather than seeing the Po River as just a vast reservoir to exploit, experts are calling for urgent protection and preservation of the waterway as an ecological system. Farmers currently use water jets to irrigate crops which results in a large amount of the water lost through evaporation.

Instead, Legambiente, a national environmental association, is urging farmers to use pipes laid in the ground to carry the water - which would cause less to be wasted.

Coldiretti is pushing for rainwater to be harnessed instead of river water for agricultural use.

"In a country with about 300 billion cubic metres of water falling annually, but which, due to infrastructural deficiencies, only retains 11 per cent of it, maintenance, saving, recovery and recycling of water are required,” the lobby said. “We are appealing for the bodies in charge to develop a water management project by activating a network of reservoirs in the area.”

The town is pioneering a method of reducing dependence on the waters of the Po by recycling water from sewage.

The town of Reggio Emilia is pioneering a method of reducing dependence on the waters of the Po by recycling water from sewage. It now generates 5 million cubic metres of water to irrigate farmland with this technique.

In the Delta, Mantovani’s consortium has installed two barriers in branches of the river to prevent the uptake of saltwater from the sea. “These barriers are allowing us to deviate the seawater and create reserves with the little freshwater arriving from the mountains,” he says.

This is being collected in vats and canals - to be used in moments when there may be only saltwater in the Delta, a very real possibility.

With little rainfall on the horizon for the next few weeks, Mantovani also explains the most immediate and vital course of action is that everyone using the water from the river reduces their consumption.

“If there is no water, everyone throughout the river’s course must play their part to lower their usage,” he says.