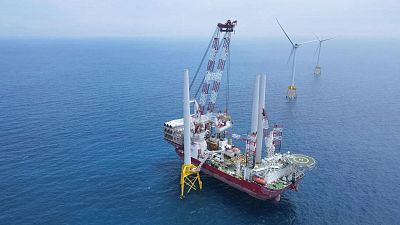 Wind farms could soon help save the world’s coral reefs from the effects of climate change.

A project started by Danish energy company Ørsted aims to provide a “safe haven” for corals by growing them at the base of turbines.

As temperatures can rapidly increase in shallow waters near the coast, this makes these locations susceptible to coral bleaching. Bleaching occurs when warm water makes corals expel the algae living in their tissue causing them to turn white.

Further out to sea, at the base of wind farms, temperatures are more stable at the surface of the water.

The idea behind Ørsted’s ReCoral project is to use these relatively stable water temperatures to limit the risk of coral bleaching and allow healthy plants to grow on the foundations of the turbines.

“To halt climate change and create a sustainable future for the planet, its ecosystems, and its people, we must speed up the transition from fossil fuels to renewables,” says CEO of the company Mads Nipper.

With governments planning significant increases in offshore energy he is confident that, if done right, this expansion could support marine life.

The idea could have a ‘significant impact’ on ocean biodiversity

The concept has already been tested in theory after the ReCoral team successfully grew young corals on steel and concrete for the first time at a test facility in 2021. Now they are looking to prove that the idea can be scaled at wind farms in Taiwan.

In June, a bigger test will be done by the ReCoral team and experts from the Penghu Marine Biology Research Centre. Thousands of coral larvae will be taken out to the foundations of four turbines at the Greater Changhua offshore wind farm.

Rather than taking anything from the existing fragile ecosystems, the project’s approach relies on collecting bundles of coral eggs that wash up on beaches - which would not otherwise survive.

“If we succeed with ReCoral and the concept proves to be scalable, this Ørsted innovation could create a significant positive impact on ocean biodiversity,” Nipper adds.

Coral reefs provide a home for almost a third of marine species and benefit 1 million people worldwide, according to the UN Environment Programme.

But increased sea temperatures due to global warming create a bleaching effect that is putting these unique habitats in danger - adding to the global biodiversity crisis.

“Environmental protection and marine biodiversity will continue to be one of the key topics of the world in the coming decade,” says Hern-Yi Hsieh, director of the Penghu Marine Biology Research Centre.

“It’s great to see that, apart from its effort to supply clean energy, Ørsted is also launching its coral project here in Taiwan to promote environmental friendliness.”

The ReCoral concept could theoretically be applied to the offshore foundations of any turbine in tropical waters, Ørsted says.

If the trial is successful, the team will share their findings for the conservation community and any wind farm developers to replicate elsewhere.