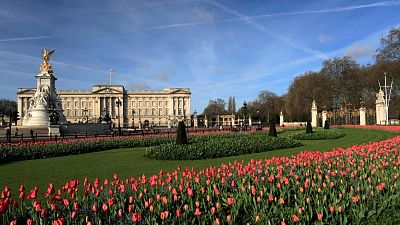 If you’ve been to London, chances are you’ve probably visited one of its eight Royal Parks.

These vast green spaces in the centre of the city which include Hyde Park, Green Park and St James’ Park are filled with stunning greenery and flowers. But this spectacle of beautiful landscaping doesn’t just happen by luck.

It’s the job of Rob Dowling and his team at the Royal Park’s nursery to grow enough plants every year to keep the city in bloom.

A giant greenhouse in central London

Hidden in the centre of Hyde Park is a glasshouse bigger than a football pitch. It has 12 zones each with their own climate control and can grow up to 450,000 plants in total.

"For this summer's production, we have roughly about 250,000 plants being grown,” says Rob Dowling, the Royal Parks Nursery manager.

“They will be going out into the parks the next few weeks."

Twice a year, each Royal Park carefully designs its flower beds for spring and summer. Once the designs are set it’s up to Rob and his team to start growing.

"Those orders will come to us and then we start to look at what we can produce,” says Dowling.

“We then look at the market for seeds, cuttings, all the plants and other materials. And then once that starts coming in, we grow them according to the delivery date of each park."

How do you grow enough plants for an entire city?

Throughout the year, a team of 12 staff and 12 volunteers are busy at work to produce enough greenery for all of London’s Royal Parks. In total, they grow around 400 varieties of plants.

In zone one of the nursery, tropical plants are grown for displays in St James’s and Regent’s Park. Another zone grows geraniums to go outside Buckingham Palace and another more herbaceous plants, destined for Richmond Park, the largest of London’s Royal Parks.

The nursery underwent a £5 million (€5.9M) renovation in 2018 to create a super high-tech greenhouse. Each zone has its own weather station connected to a computer and is calibrated to the perfect settings for their individual crops. Both temperature and humidity are closely monitored.

“If it gets too sunny as well, we have screens that will go across to stop the plants from getting damaged by the strong sun."

How is climate change affecting the growth of plants?

So far this year in London, it’s been unseasonably warm. Though to some, this might not sound like a bad thing, the warm temperatures have accelerated the growth of most plants, which Rob and his team now have to slow down.

Unexpected warmth can often cause plants to grow very tall and skinny, without the strength to support themselves.

"We can reduce the temperature and we can also pinch out some of the plants,” Dowling explains.

“So it's almost like cutting them back, which might sound drastic, cutting the flowers off of summer flowering plants, but it does help the plant in the long run. It means they bush out and become a much healthier plant."

Watch the video above to learn more about the Royal Parks nursery.