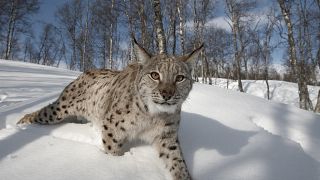 Campaigners pushing for the reintroduction of Eurasian lynx to Scotland are celebrating the results of a year-long consultation to assess public opinion on their ambitious plans.

The Lynx to Scotland study, conducted between March 2021 and February 2022, suggests there is enough public appetite to further explore the potential benefits of and barriers to reintroducing the big cats, which were native to Scotland more than 500 years ago.

The study conducted research with rural stakeholders across the Cairngorms National Park and Argyll, which have been earmarked as habitats where populations of the apex predator could thrive.

Previous research has confirmed that the Highlands has enough habitat and suitable prey to support a population of around 400 wild lynx. These big cats are a keystone species, which means that introducing even a small number of them can have a big impact on the environment.

However, the charities pushing for lynx’s reintroduction say the project’s success “is more dependent on people’s attitudes than the ecological science.”

Why there’s a big debate over big cats in Scotland

Farmers, gamekeepers, foresters, conservationists, landowners, tourism operators and rural communities were among the groups approached for their opinions. Research was organised in partnership with the charities SCOTLAND: The Big Picture, Trees for Life and Vincent Wildlife Trust.

Unsurprisingly, one of the biggest concerns highlighted by the study – and in particular from the farming community – was the potential harm to sheep. A consensus was reached that any further exploration of the possible reintroduction must look at ways to mitigate this risk.

However, the study also highlighted the positive impact that lynx could have on local ecosystems.

“Supporters of lynx reintroduction anticipate that in predating woodland deer, lynx will contribute to nutrient cycling, vegetation and tree regeneration, and carcass provision for other species,” says the report.

Who is against the reintroduction of lynx?

Stakeholders against the reintroduction of lynx, or who believe Scotland isn’t ready for it, thought it was unrealistic to hope that the big cats could help self-regulate ecosystems in the contemporary Scottish landscape.

According to them, it is highly doubtful that the introduction of a large carnivore could replace human intervention, such as deer culling.

Some estate owners believed the reintroduction of lynx could jeopardise their hunting business, with one estate putting a price of €475 on each roe deer – the big cat’s preferred prey – rising to as much as €1,785 for the most highly prized bucks.

“When it comes to the return of the lynx, we’re in the realm of not yet – but not never,” says Peter Cairns, executive director of SCOTLAND: The Big Picture.

“Positively, this new research shows there is sufficient appetite amongst different stakeholders to develop a more comprehensive understanding of this little-known species and the potential for its return to Scotland.”

Separate research carried out for the Scottish Rewilding Alliance in 2020 found that 52 per cent of people in Scotland support lynx reintroduction, while 19 per cent oppose the idea.