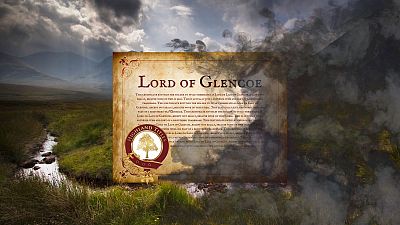 It wasn’t the biggest takeaway from last month’s Oscars ceremony - we all know what that was - but this year’s nominees had an unusual item in their swag bags.

A plot of Scottish land was ‘given’ to winners and runners-up, including Billie Eilish, Benedict Cumberbatch and Jessica Chastain.

Highland Titles is the company behind the scheme, which claims to sell small bits of the firm’s estate - plus accompanying titles of lord, lady or laird - on customers. The company paid thousands of euros (up to €22,000) to feature in the ‘Everyone Wins’ gift bag, organised by an LA marketing company.

But is everything as straightforward as it seems?

Highland Titles might not give you a title after all

The publicity bid certainly won the company, which is registered in the Channel Islands, a spot in the limelight. Dozens of headlines reignited a stir in Scotland, where people were quick to point out the claim to owner and lord-ship is meaningless.

"First and foremost, you are not the owner of any land in Scotland despite what this company might have led you to believe," Andy Wightman, a former Green Member of the Scottish Parliament, wrote in an open letter to nominees. “You have also not been given any right to style yourself Lord or Lady of Glencoe. Highland Titles has no authority or power to bestow such a title on you."

In response to this, Highland Titles said that someone who buys a plot of land does obtain a “personal right” to the land and that this is a “settled legal position.”

Since forming over a decade ago, family-run Highland Titles has changed the wording on its website to better acknowledge this, and described the novelty gift scheme as “harmless fun”. ‘Lords and Ladies of Glencoe’ number over 300,000, according to the site. Minus Academy Award nominated celebs - and some Elden Ring fans - they’ll each have paid at least £30 (€36) for a square foot of land at Duror - around 10 miles south of the famous Glencoe valley - or another estate.

By that estimation, Highland Titles will have received around £9 million (€10.8 million) to put towards its stated aim of creating nature reserves in Scotland - of which it now owns five.

“The environment sector in Scotland generally does not hold a high opinion of the work carried out by Highland Titles.”

“The environment sector in Scotland generally does not hold a high opinion of the work carried out by Highland Titles,” an anonymous source at a major Scottish NGO tells Euronews Green. “But their reputation for running to court means that people don’t feel comfortable speaking out.

“Scots with a wider cultural awareness find the whole proposition of selling titles ludicrous and insulting. As you would find with any brief trawl through social media on the subject.”

Director of Highland Titles Douglas Wilson responded to Euronews Green that the company had never been to court about anything. But our off-record conversations with other environmental groups and individuals in Scotland point to the company having a hostile reputation.

It’s easy to understand the company’s high profits. Tree-planting schemes tap into our eco-anxiety; combining such promises with a novelty gift pack is well-tailored to UK, US and Australian consumers. But as we’ve previously reported, it’s important to do the homework on these companies.

Here we dig into who Highland Titles are and what they do - and how they fit into the Scottish environmental scene.

Who is behind Highland Titles, and what do they do?

Highland Titles Limited was founded by retired English zoologist Peter Bevis in 2006 in Alderney, a small Channel Island under Guernsey’s jurisdiction, and a corporate tax haven.

‘Highland Titles’ purchased the 220 acres that would become its flagship ‘Nature Reserve’ and in 2007 built a visitor centre where ‘lords and ladies’ would be received. According to its website, the mission is to “restore land devastated by centuries of farming and unsympathetic commercial forestry.” Later that year it began planting native trees.

In 2014, ownership of Highland Titles Limited was transferred to Highland Titles Charitable Trust for Scotland, registered in Guernsey, with the trustees listed as Bevis’s wife and Wilson, their son-in-law. Under Guernsey law, no charity is obliged to make its accounts public, and Highland Titles Ltd has never shared its profits.

So the critical question that all charities face has remained unanswered: how much of the funds are spent on the stated aim of conservation?

Who owns the Lord and Lady of Glencoe trademarks?

There are a number of other companies and affiliates linked to the Highland Titles enterprise.

The Lord, Lady and Laird of Glencoe titles are trademarks owned by ‘Highland Titles OU’ registered in Estonia, having been transferred by another company called Highland Titles Limited, registered in the British Virgin Islands. The UK’s Intellectual Property Office lists Wilson as the representative of this OU - which translates as a private limited company.

In other words, Highland Titles OU is the company that owns the trademark. And according to its Estonian fiscal report, which is accessible for €3, it made €2,488,706 in revenue in 2020, presumably from sales of the right to use the trademark.

The report shows more than a million euros leave the account for ‘goods, raw materials and services’, leaving the profit at €741,537 that year.

Highland Titles’ business model - channelling international affection for the Highlands towards an environmental cause - is not limited to Scotland. The report also mentions the progress of a sister brand called ‘Celtic Titles’ which launched in 2020, and “which will hopefully appeal to the Irish diaspora.” The website is nearly identical to Highland Titles - except with a dark green banner instead of a blue one, and the asterisk detailing your right to use the ‘Lord or Lady of Ardmore’ titles is more of a footnote.

The website is managed by Highland Titles OU, though Highland Titles Limited is the owner of these trademarks on the UK’s IP site. It’s a smaller operation so far - the trademark only applies to paper, unlike all manner of merchandise (from tartan kilts to cufflinks) that the Glencoe name can be emblazoned on. But the company’s target audience is well represented on the TripAdvisor reviews it shares online. “Absolutely Brilliant! I purchase this as gift for my Irish-descendant spouse for St. Patrick's Day!” [sic] writes one happy customer.

The land is Slievekirk Wood in Ardmore near Derry, a three and a half acre plot of birch trees that sold for £29,000, according to woodland.co.uk. Celtic Titles’ website describes the wood and its wildlife in detail, but says little on what the sale of plots (starting at €40 per square foot) will fund. A paid for advertisement in the Irish Times last year makes reference to thinning the trees and digging a pond.

How is Celtic Titles connected to Emerald Heritage?

The advert states that Wilson, buoyed by Highland Titles’ success, decided to crowdfund an Irish conservation project in the thinking-space the pandemic afforded. As it happens, Highland Titles’ Irish aspirations go back a little further than 2020. Seven years earlier Bevis founded ‘Emerald Heritage Ltd’; it was dissolved in 2015, but a website of the same name - registered in Alderney - shows a similar model, offering people the chance to become a ‘Squireen’ for £30 per square foot.

Amongst webpages on Game of Thrones filming locations, Emerald Heritage’s mission statement claims that it “was formed by Irish people in response to the deep emotional wrench of generations of landless Irish who, often forced by eviction, starvation, unemployment and discrimination, had to leave their home to seek a better future across the globe.”

Highland Titles owns nature reserves at five sites in Scotland. There’s no one principle behind the land management, Wilson tells Euronews Green. “Our nature reserve at Mountainview [10 miles north west of Invergarry village] is about removing the non-native trees once it’s commercially viable and replacing them with native woodland,” he says, adding this is a long-term project on the 180 acres the company bought in 2014.

According to the website, the conifer plantation at ‘Mountainview’ is now unlikely to be felled before 2025. More than 1,500 trees have been planted elsewhere in the meantime it says, and ‘lairds’ are free to fish in Loch Loyne.

“Our nature reserve at Glen Nant is totally different,” Wilson adds. “It’s 130 acres of ‘Scotland’s Rainforest’ - a magnificent ancient woodland. There, it’s more about protecting what is already there.” Glen Nant was designated as a National Nature Reserve in 1979.

The company also has an interest in rewilding, and restoring critically endangered and extinct species in Scotland, such as wildcats and lynx. It previously partnered with Wildcat Haven, a community interest company (CIC) founded in 2014 by English biologist Paul O'Donoghue.

How is Highland Enterprises connected to Wildcat Haven and Lynx UK Trust?

Highland Titles gifted a few hectares of its land to another arm of this CIC, Wildcat Haven Enterprises (incorporated 2015) enabling them to join the souvenir-plot selling scheme. In a sign of their close links, Wilson became director of the new enterprise for two stints in 2015 and 2016, before finally resigning. Highland Titles also helped pay for a large wildcat rehabilitation centre at Duror, completed in 2018.

When Andy Wightman called the companies’ connections into question in a blog entitled ‘Wildcat Haven, Bumblebee Haven or Tax Haven?’, Wildcat Haven Enterprises tried to sue the then MSP for an astonishing £750,000. Wightman won the case in 2020.

Should more be done to tackle 'green lairds' in Scotland?

Land ownership in Scotland is hugely culturally sensitive, shaped by the legacy of the Highland Clearances, and the patterns of rural depopulation and emigration that followed.

The land tells that story too; as beautiful as the Highlands look to an untrained eye, overgrazed hillsides speak of impoverished ecosystems. Reforesting has an important part to play in all our futures - but who does it, and how well, are recurring questions as more and more ‘green lairds’ close in on the country.

From multinational brewery Brewdog buying up land to offset its carbon emissions, to Highland Titles purchasing around 850 acres for souvenir plot selling and conservation, this new form of green lairdship can take different forms.

“Unfortunately land ownership by absentee or green lairds is for the most part damaging.”

Rhoda Grant
Regional Labour MSP for the Highland and Islands

“Scotland’s natural capital has become an increasingly attractive proposition for private investment,” Scottish environment and land reform minister Màiri McAllan tells Euronews Green. “We must ensure equitable sharing of the benefits of this investment with local communities and wider society.”

The Scottish government has promised a Land Reform Bill by the end of 2023, which McAllan says “will further tackle Scotland’s historically iniquitous patterns of land ownership” including the “problematic scale and concentration of ownership.” But there are concerns about how quickly legislators can keep up with the green ‘land grab’.

Labour MSP for the Highland and Islands Rhoda Grant adds, “The most beneficial ownership of land is that which is held in community ownership; communities are committed to the land and their home.

“Unfortunately land ownership by absentee or green lairds is for the most part damaging.”

What does Highland Titles say?

In response to the major Scottish NGO worker’s comments that Highland Titles are not held in high esteem by the sector, Douglas Wilson said, “Our conservation work is there for all to see. Our nature reserve at Duror is an official 4 star tourist attraction and, according to Trip Advisor, one of the most popular nature reserves in Scotland. Our nature reserve at Glen Nant is recognised as a National Nature Reserve.”

He also pointed out that they have just achieved a Guinness World Record for the world’s biggest bug hotel.